Baltimore is the largest city in Maryland and is located near the northern tip of the Chesapeake Bay. Baltimore is a vital city that is both a popular tourist destination and one of the most affordable cities in the northeast to live. It is a city of neighborhoods and includes the cobblestone streets of historic Fells Point and Federal Hill, the wide avenues of Mount Vernon, and the modest blue-collar neighborhoods to the east and west of downtown. The picturesque Inner Harbor is the center of hotels, restaurants, shopping and business.

The world-class Baltimore Symphony Orchestra performs in the spectacular Meyerhoff Hall, and the Peabody Conservatory of Music also hosts a concert series. The Hippodrome Theater, home of original and touring shows, is located in a new shopping and residential district around the corner from the University of Maryland, Baltimore campus. The Lyric Opera House, located next to Meyerhoff Hall, is home to the Baltimore Opera Company as well as many other original performances. The city also supports many educational and cultural institutions, including the Maryland Science Center, Center Stage, Walters Art Gallery, the Baltimore Museum of Art, several repertory theaters, over a dozen museums, and the Maryland Zoo in Baltimore. There are more than 70 accredited institutions of higher education in the Baltimore-Washington area. Other cultural opportunities offered by Washington, D.C., Philadelphia, and New York are easily reached by car or train.

Baltimore is a big-league sports town and the Baltimore-Washington region boasts two NFL teams, the Ravens and the Redskins; two major league baseball teams, the Orioles and Nationals; several minor league baseball teams; an NHL team, the Capitals; an NBA team, the Wizards; a professional soccer team, DC United; and professional lacrosse, the Thunder. The area is the center of the college lacrosse world as well as major college football, basketball, baseball, and soccer (University of Maryland and Navy). 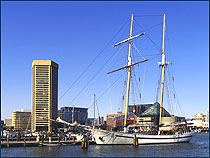 The state of Maryland has varied topography: it extends from the shores of the Atlantic Ocean to the Allegheny and Appalachian mountains. Eastern Maryland's Atlantic Coast offers many miles of beautiful beaches, and Baltimore's mild weather makes outdoor recreation accessible for much of the year. There are many bike trails in the Baltimore area, including the C&O Canal Trail along the Potomac River that provides access to Western Maryland where mountain biking and cross-country ski trails are abundant.

Baltimore is situated in a unique region of our country in which several distinct, major cities are located within easy reach, offering a wealth of cultural, recreational, and professional opportunities. The Baltimore and Washington, D.C. beltways are within 20 miles of each other, and Washington is easily reached by car or train. Philadelphia is reached by car in 90 minutes and by train in a little over an hour, and New York City can be reached by car in 3 hours and by train in a little over two hours.