Active Student Has Successful Surgery for a Painful Bone Cyst

After a long day of working out or running around on a field, athletes know it's fairly normal to feel tightness, even for a few weeks, in the same area.

Well, that's what Meredith Riley had always thought. During her sophomore and junior years of high school, Meredith was an active member of the marching band, played on the lacrosse team, ran track and field, and also was a member of her high school's dance team.

However, during this very active time of her life, a sharp pain threatened to stop Meredith in her tracks.

During the indoor track and field season, Meredith, who ran long distances, began to feel an immense amount of pain when she flexed her hip. She couldn't do anything, let alone run, without feeling a debilitating pain.

After a few months, Meredith and her mom decided it was time to visit a local physician to investigate the problem. It was there that they took an X-ray and the doctor decided it was a pulled muscle. Meredith was advised to complete physical therapy.

"It had kind of become a pain that I was always used to," Meredith says. "I figured it'd just be there forever, and I had given up hope that it would go away."

As the months went on, Meredith's pain only got worse. It was beginning to impede her life – she could barely walk from class to class at school.

Meredith visited the doctor again and an MRI was ordered. When the results came back, she learned that she had a subtle aneurysmal bone cyst that was eroding her thigh bone. Meredith says she felt "frightened and freaked out." 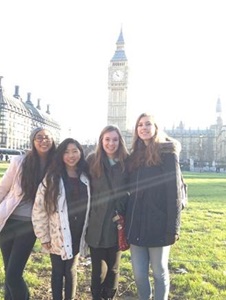 After surgery, Meredith (2nd from right) was able to travel to London with her band to march in a New Year's Day parade.

Luckily, Meredith and her mom quickly found their way to the University of Maryland Department of Orthopaedics and Dr. Vincent Ng.

In Meredith's first appointment with Dr. Ng, he calmly and clearly explained what was happening in her bone.

Dr. Ng told her they needed to get a biopsy to determine the lesion was not cancerous (thankfully, it wasn't). He then explained why they needed to move forward with surgery – if the lesion was not removed, it would continue grow and further weaken her bone. Dr. Ng compared it to the size of a small egg, which helped Meredith visualize how her femur was being affected.

"I don't think I would've had such a great experience if it wasn't for Dr. Ng," Meredith says. "This was a very traumatic experience for me, and his involvement and support was very important. He really cared about my health instead of just getting me in and out."

While surgery was very grueling, Meredith is happy she had the support of her family, Dr. Ng and his team. He regularly called her and her mom to check in during the months after surgery as she completed physical therapy.

Meredith is now a freshman at the University of Maryland, College Park and is majoring in Government and Politics. She keeps a full class schedule, and is also a member of the "Mighty Sounds of Maryland" Marching Band at UMCP. Meredith also walks "all over campus" and regularly participates in yoga.

"I don't think I would've adjusted back to life so quickly if it wasn't for Dr. Ng," Meredith says. "His support before, during, and after surgery made all the difference."