In terms of new advances in surgery, surgery and removing the portion of the lung affected by lung cancer is the treatment we most often choose. In terms of technological advances, one of the things that we're able to do at UM BWMC in selected patients with early stage cancers, is offer a video lobectomy, which is using video technology to help visualize and help along the operation in a minimally invasive manner. We can avoid larger and sometimes more painful incisions.

The usual, traditional approach for operations for lung cancer is to approach it through a larger incision, up to 6-8 inches long. That allows us to look inside the chest, and it usually involves spreading the ribs apart far enough that we can peer into the chest and see the anatomy of the lungs and the tumor's relationship to the lungs and the major structures within the chest. We're able to see and access everything in the chest from the incision that we make. No other incisions are made except to place drains, and occasionally special implements.

In a video lobectomy, the visualization is provided by a video camera on a slender tube that's inserted into the chest. This camera allows us to see within the chest and then we only have to make other incisions, usually less than an inch long that we can insert our instruments through, and work under the direction of the video camera.

The advantages of a video lobectomy as opposed to traditional, open lobectomy with a thoracotomy, a bigger incision, is that we are usually able to offer our patient a shorter length of stay, less pain, and hopefully a quicker recovery. Many studies have shown that for selected early-stage patients, the complication rates can be as low or lower than traditional open thoracotomies.

Are there risks to this type of surgery?

One common misconception we hear frequently is that if you have an operation for lung cancer, when you open the chest for any reason and expose the tumor to air, that it's going to grow or spread faster. That's not the case--there's no evidence to indicate that the cancer will grow or spread faster with an operation. If that were the case, thoracic surgeons wouldn't be able to operate for lung cancer.

Is surgery the right option for me?

Patients who undergo operations for lung cancer are carefully screened beforehand to make sure they have the capacity to recover afterwards, in terms of their lung function and their overall reserve of how well they're able to breathe. We perform pulmonary function testing in order to assess their lung volume and pulmonary reserve. Though these tests aren't foolproof and we're careful, most people can tolerate operations if they're properly selected.

In terms of the recovery time, most patients are in the hospital for a little bit less than a week, usually 4-6 days after a standard thoracotomy. They're able to go back to work within 3-4 weeks after surgery. After any operation, people may have pain, and we treat the pain with oral pain medication, weaned off over a week or two after the operation. 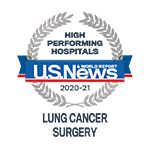