Celebration for the Miranda Twins 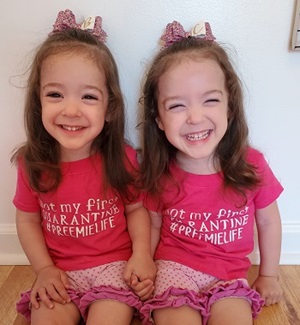 The two-and-a-half-year-old Miranda twins are busy hitting all of their milestones, including learning their ABCs. The girls are extremely verbal for their age, and one would never know the extraordinary odds they had to beat to get there.

The gender reveal is supposed to be one of the most exciting parts of pregnancy. For Ashley and Nelson Miranda, it was different. The Mirandas already knew they were expecting identical twins. Because of this, Ashley was examined every two weeks to make sure she didn't develop twin-to-twin transfusion syndrome (TTTS), which is when the babies shared one placenta in the womb (also known as a monochorionic pregnancy).

During week 18, the couple found out they were expecting girls; however, Ashley had developed TTTS. At some time during the pregnancy, one twin became the donor, who gives away more blood than they receive, and the other twin became the recipient, who receives too much blood. The donor twin was at risk of dehydration, while the recipient twin was at risk for organ failure as a result of too much fluid.

Once this was determined a high risk pregnancy, Ashley and Nelson were referred to Ozhan Turan, MD, director of fetal therapy at the Center for Advanced Fetal Care at UMMC, for further care and treatment. Ashley underwent laser ablation surgery in hopes of improving her condition just two days after their first appointment with Dr. Turan. Laser ablation surgery is a minimally invasive procedure performed on the placenta that stops the abnormal fluid exchange between the twins. This procedure gives babies the best chance of a healthy outcome.

Ashley was in and out of the hospital for the rest of her pregnancy to monitor the twins' health and development. Her water broke just before 30 weeks, and she spent a few days in labor. The girls were born via C-section at exactly 30 weeks. Although the twins' first year of life was not a typical one, they are now happy and healthy.

Ashley praises Dr. Turan and his team for the care the whole family received. "We could never thank Dr. Turan enough. He took the time to check in with me and my husband on how we were feeling mentally and physically. He was very honest, but very reassuring. I just could have not asked for a better surgeon."

Every year, the Miranda's celebrate the anniversary of their laser ablation surgery with ice cream. This was the first year the girls understood that this day is a special celebration, their own personal holiday.