Vrushali and Ashwin, from New Jersey, were beyond excited when they learned they were expecting identical twin boys. The pregnancy was going well: Vrushali was eating well, getting enough sleep and going to regular consults.

It was at one of her regular consults in her second trimester that Vrushali learned shocking news: her twins had developed a condition called Twin-to-Twin Transfusion Syndrome (TTTS) and their case was severe.

The Chandra twins shared one placenta in the womb (known as a monochorionic pregnancy) and at some point during the pregnancy, one twin began to receive more blood from the placenta than the other twin. Baby A (donor twin) was at risk of dehydration while Baby B (recipient twin) was at risk of organ failure from taking in too much fluid. 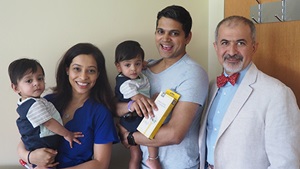 Their doctor in New Jersey referred them to a hospital in Pennsylvania that same day. For many patients with TTTS, including Vrushali and Ashwin, options are limited. Doctors in Pennsylvania confirmed that there was nothing they could safely do to save the twins. When all hope seemed lost, they were given the option of a second opinion at the University of Maryland Center for Advanced Fetal Care (CAFC). Vrushali and Ashwin jumped at the chance that their boys might be saved.

Their doctor put them on the phone with Ozhan Turan, MD, director of fetal therapy at UMMC, who has expertise in treating extreme cases of TTTS. The doctors discussed the twins' condition, and Dr. Turan recommended Vrushali and Ashwin travel to Baltimore as soon as possible. In a matter of hours, both were in Dr. Turan's office.

In the span of their trip, the hospital in Pennsylvania communicated all of Vrushali's medical records to UMMC, which Dr. Turan reviewed before they arrived.

"I can understand why you've been told 'no' there. Based on what I've seen, maybe we can help," Dr. Turan said upon their arrival to the CAFC. 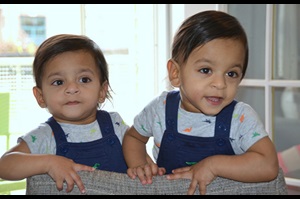 Baby A (left) and Baby B (right) are healthy and happy.

Vrushali and Ashwin decided to undergo immediate laser ablation surgery to try to save the twins. This involves surgically closing off some blood vessels to the recipient twin to rebalance blood flow. Their case was even more complicated because the blood vessels were so close to one another—one wrong move could have spelled the end for the twins. But Dr. Turan was confident he could save them, and after one of the longest laser ablation surgeries of his career, exclaimed "we still have two heartbeats!" 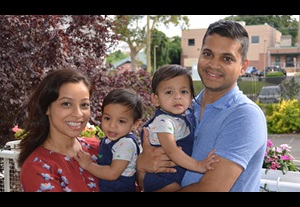 The twins were delivered prematurely at 28 weeks due to complications of TTTS, but despite spending time in the NICU to gain strength, they were thriving.

Just over a year later, both Baby A and Baby B are your typical toddlers. They've started to develop their own personalities: Baby A is a quiet observer and learner while Baby B is an explorer and a bit of a troublemaker. The family enjoys going on walks together are thankful that they get to experience life as a foursome.

Vrushali has some advice for anyone experiencing a difficult health situation like TTTS: "Second opinions are worth it. Even though we were told 'no' by the best-of-the-best, we still came out OK. It's natural to feel overwhelmed, but it's worth doing your research and asking questions - because it might lead you to the best possible outcome."

While nothing can be done to prevent TTTS, there are certain risk factors that can help with early detection. TTTS only affects identical twins that share a placenta, so pregnant women with those conditions should be screened for TTTS.