Developmental Dysplasia of the Hip

Developmental dysplasia of the hip (DDH) encompasses a wide spectrum of hip problems, from subtle hip instability in the newborn, to subluxation, dislocation, and acetabular dysplasia (abnormal socket growth).

Diagnosis of Developmental Dysplasia of the Hip

The incidence of DDH in the general population is 1:1000. The chances are increased if a child has a breech presentation, is a female, is a first born infant, and if there is a family history of DDH. Since DDH can be associated with packaging inside the uterus (breech); other congenital anomalies of the foot (metatarsus adductus or hooked foot), knee (subluxation), or neck (wry neck or torticollis) can be associated with dislocation of the hip. The diagnosis of DDH is usually made by a thorough history and clinical examination. Often ultrasound is used to confirm the diagnosis and aid in treatment in children younger than 4 to 6 months of age. In children older than 6 months, X-ray is used to evaluate the hip and its bony development as enough of the cartilage has turned to bone to be seen on an X-ray.

Treatment for Developmental Dysplasia of the Hip

Treatment depends on the age at detection. Most children between birth and 6 months of age can be treated with a Pavlik harness. The soft harness helps guide the hip and hold it in the optimum position and it is not removed until the hip becomes stable. (approximately 6 weeks) Once stability is achieved and documented by ultrasound, the harness is slowly weaned over several weeks. (wearing during nap and night time) Once the harness is removed the child is followed until the hip is normal clinically and by X-ray to make sure the socket develops normally. Oftentimes further bracing and sometimes surgery is necessary to stimulate and or correct socket development.

Children between the ages of 6 to 12 months (under walking age) are usually treated with a closed reduction of the hip. This is done in the operating room under anesthesia. Once asleep, dye is put into the hip joint and the femoral head is guided into the socket manually. Once in position, a spica (body) cast is applied to hold the hip in position. The hip is usually held in this cast for 3 months, sometimes requiring a change of the cast after the first 6 weeks. Once the cast is removed the child is followed until the hip is normal clinically and by X-ray to make sure the socket develops normally. Oftentimes further bracing and sometimes surgery is necessary to stimulate and or correct socket development.

Children between the ages of 12 to 18 months (above walking age) may be treated with either a closed reduction or an open reduction (surgery). If surgery is required, the joint is opened, the femoral head is placed into the socket, and the hip capsule (lining) is tightened. The repair of the joint is protected in a rigid body cast for approximately 6 weeks. In children older than 18 months of age, open reduction is usually the treatment of choice. In addition it is often necessary to help the socket develop surgically by making a cut in the pelvis bone. Sometimes it is also necessary to cut the femur bone to shorten (and sometimes rotate) it to allow the ball to be placed into the socket without undo pressure on it. These additional surgeries help guide development of the hip joint; correcting the shallow socket and abnormal rotation of the femur bone. Once again a cast is used to hold the repair for about six weeks.

To make an appointment with one of our orthopedic specialists or to learn more about our services, centers and treatment options, please call 410-448-6400. 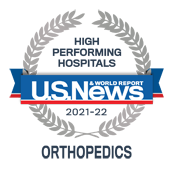