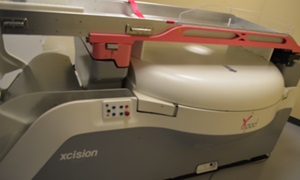 The image-guided system, known as GammaPod, could significantly shorten the radiation treatment time for early-stage breast cancers and may even eliminate the need for surgery in certain patients. GammaPod was invented by University of Maryland School of Medicine faculty, including clinical medical physicist and professor of radiation oncology Cedric X. Yu, MS, DSc and Professor and Chairman of Radiation Oncology, William F. Regine, MD, FACR, FACRO. The technology was developed and patented in 2006 with the help of a $3.5 million grant from the National Institutes of Health.

By the end of 2015, patients will start enrolling in a clinical trial evaluating GammaPod's feasibility and safety, which must be established before the FDA approves it for the market. Among its many benefits, GammaPod offers greater convenience and potentially fewer side effects for noninvasive and small invasive breast cancers, notes Dr. Regine.

"The idea is that GammaPod can deliver radiation treatments more precisely, with less exposure to the uninvolved breast tissue than any other device that is currently on the market," explains the trial's principal investigator Steven Feigenberg, MD, a radiation oncologist at the University of Maryland Marlene and Stewart Greenebaum Cancer Center and a professor of radiation oncology at the University of Maryland School of Medicine.

"Conventional treatments with whole-breast radiation typically last from four to six weeks and partial breast treatments last one to two weeks," he adds. "But this device may be able to do it in less than a week and potentially even one day due to its pinpoint accuracy."

GammaPod works by combining thousands of precisely focused beams of radiation from three dozen rotating sources with a two-layer, vacuum-assisted cup that holds the breast in place to achieve accuracy within 2 millimeters. The system is the first breast specific device to use high-dose radiation known as stereotactic body radiotherapy (SBRT), which most commonly treats tumors in the brain, lungs, spine and liver.

The highly targeted radiation minimizes damage to the remaining breast tissue and major organs such as the heart and lungs — a potential side effect of standard breast radiation. Additionally, GammaPod's breast-immobilizing cup comes in 28 sizes to provide a tailored fit for each woman. Treatments range between 10 and 40 minutes.

"The typical way external beam radiation is delivered to a part of the breast is through four or five beams coming from different directions, and the areas they intersect is where the highest dose of radiation is delivered to kill potential tumor cells," says Dr. Feigenberg, also director of clinical research and co-director of the Program of Excellence in Technology-Based Translational Research for the Department of Radiation Oncology.

"GammaPod actually uses 36 beams which rotate around the patient, simulating several hundred beams of radiation," he adds. "So the areas where they're not intersecting are receiving a small percentage in comparison to standard breast radiation, which will minimize potential side effects from radiation."

The University of Maryland Medical Center (UMMC) will be the only initial site for the GammaPod clinical trial, later joined by four other centers around North America. Study participants will receive a single "boost" treatment with GammaPod to the breast area where their tumor was removed, as well as three to five weeks of traditional whole-breast radiation. Initially, their total radiation treatment regimen will be shortened by one week.

Assuming the trial meets expectations, Xcision Medical Systems, LLC will apply for FDA approval to market the GammaPod system. Future research will then compare the technology with somewhat similar devices or treat early breast cancer patients before surgery to determine if a completely noninvasive approach is feasible, Dr. Feigenberg says.

"I'm ecstatic to be a part of bringing this to the clinic," he says. "Having been one of the early adopters of this type of treatment for lung tumors, bringing this now for the treatment of breast cancer is very exciting. It's been a long time coming."