To make an appointment, or to contact the gastroenterology division of the University of Maryland Children's Hospital, please call 410-328-6749. 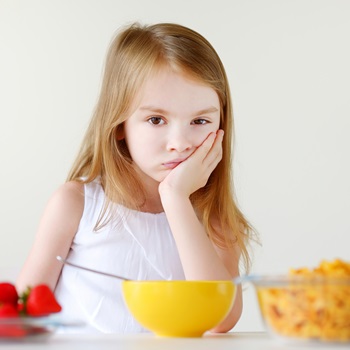 The alarming feeling of getting food stuck in the throat is all too common among sufferers of eosinophilic esophagitis (EoE), an allergy manifesting in the esophagus that’s being encountered with increasing regularity by physicians at University of Maryland Children’s Hospital (UMCH).

Assistant professors of pediatrics Anupama Kewalramani, M.D., and Anjali Malkani, M.D., lead a twice-monthly EoE practice that aims at diagnosing and treating affected children — who also deal with failure to thrive, feeding issues and vomiting, among other symptoms — and tailoring appropriate treatments to the circumstances of each young patient and family.

About 40 new pediatric EoE patients come to UMCH each year, with 150 patients seen on a recurring basis. The disorder, misdiagnosed for many years as gastroesophageal reflux disease or GERD, is becoming better understood by pediatricians, gastroenterologists, allergists, pathologists and other clinicians, according to Drs. Kewalramani and Malkani.

“If the pathologist is not aware of it, they will not be able to diagnose it,” explains Dr. Malkani, whose clinical interests also include constipation and inflammatory bowel disease, feeding disorders and reflux disease. “Awareness of it is increasing as is the incidence of the disease.”

“All allergic diseases are increasing in incidence, and this is doing the same,” adds Dr. Kewalramani, whose clinical interests also encompass asthma and food allergies. “It’s probably due to an interplay of genetics and environment.”

White Blood Cells Build Up in the Esophagus

Eosinophilic esophagitis derives its name from the white blood cells called eosinophils that accumulate in the esophagus as an allergic reaction to foods or other allergens. This buildup inflames or scars the lining of the esophagus, narrowing it and causing problems swallowing. Some patients require emergency room visits because food becomes lodged in their esophagus; others with milder cases may simply be classified as “picky eaters” because they avoid problematic foods.

“These patients usually have some other kind of allergic disease as well, such as asthma, hayfever or eczema,” Dr. Malkani says. “A lot of them also have a family history of those problems, and a small percentage have a parent or sibling with EoE.”

But EoE can only be definitively diagnosed by retrieving a biopsy of the patient’s esophageal lining using an endoscope. If abnormal numbers of eosinophils are present in the lining, the condition is confirmed. Blood tests, skin prick tests and skin patch tests can help identify which allergen(s) are contributing to the problem.

Treatment choices for eosinophilic esophagitis are varied and depend on the severity of a patient’s case, as well as the ease of integrating treatment into daily life. An elimination diet based on testing that cuts out common allergy-triggering foods or an empiric 6 food elimination diet is effective.

Alternately, medications for the condition, including steroid formulations used for asthma, can help reduce the buildup of eosinophils in the esophagus, thereby lowering inflammation levels. Some patients with severe cases may even require a special formula, ingested either by mouth or through a feeding tube.

But all treatment choices affect patients’ quality of life in some way, and patients and families often have a choice about which may work best for their lifestyle.

“We review all treatment options with families and consider their point of view,” Dr. Malkani notes. “We base therapy on what they feel they can and can’t do, but most families do want to try the elimination diet. If that proves impossible, they’ll opt for medication. We see combinations, switching from one treatment to another.”

Ongoing analysis about the effectiveness of EoE patients’ treatments is helping UMCH physicians determine which therapies may best suit patients exhibiting certain characteristics. Over time, this can reduce the number of endoscopies each patient requires, which are done periodically to assess the esophageal lining.

Children with other allergy-based conditions who develop any gastrointestinal symptoms are good candidates for referral to UM’s eosinophilic esophagitis practice, Drs. Kewalramani and Malkani say.

“If a child with another allergic condition isn’t growing properly, is a picky eater or has abdominal pain, the child should automatically be referred,” Dr. Kewalramani adds.