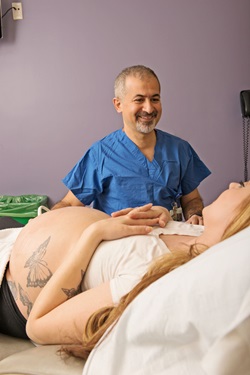 The incidence of placenta accreta — a condition that occurs when the placenta attaches to the uterine wall — has increased 10-fold in the past 50 years due at least in part, experts say, to the increasing rate of caesarian deliveries performed in the United States. Women at greatest risk of placenta accreta are those who have had a previous cesarean section.

“Placenta accreta is a potentially life-threatening condition with about seven percent of women dying, particularly in developing regions,” says Ozhan Turan, MD, PhD, FACOG, director of Complex Obstetric Surgery at the University of Maryland Medical Center (UMMC) and associate professor of Obstetrics, Gynecology and Reproductive Sciences at the University of Maryland School of Medicine.

The high mortality rate is due to the severe bleeding that occurs when the placenta is unable to be separated from the uterus. As many as 90 percent of patients with placenta accreta will require a blood transfusion during surgery and the majority of them will need massive blood transfusions defined as more than 6 units of red blood cells.

Recognizing the need for a more multidisciplinary approach to treating women with high-risk conditions like placenta accreta, Dr. Turan established the Complex Obstetric Surgery Program within the Center for Advanced Fetal Care at UMMC. The program brings together experts from Maternal and Fetal Medicine, Anesthesiology, Neonatology, Diagnostic Radiology, Acute Care Surgery, the Critical Care Resuscitation Unit and UMMC’s Blood Bank. Working as one unit, the Complex Obstetric Surgery program helps to identify and treat pregnant women who will require complex surgery. In addition to placenta abnormalities, women with prior C-sections or abdominal surgery, morbidly obese patients and pregnancies that require an EXIT (Ex Utero Intrapartum Treatment) or abdominal cerclage procedure are evaluated and treated.

“By establishing this program we are advancing the level of care these women receive here at UMMC and providing opportunities for research so standards of care are continually improved for women everywhere,” says Dr. Turan.

For placenta accreta, the American College of Obstetricians and Gynecologists recommend that suspected cases be managed with a planned cesarean hysterectomy to prevent the potential for severe blood loss. “Most patients with placenta accreta will need a hysterectomy, but there is a growing trend to delay the hysterectomy or avoid it altogether,” adds Dr. Turan.

Earlier this year, Dr. Turan co-authored a paper in the American Journal of Obstetrics & Gynecology on conservative management of placenta accreta. Conservative management describes any approach whereby a hysterectomy is avoided. Women who wish to have other children may find this approach more desirable, but there are many risk factors to consider. Women must be closely monitored if the placenta is left behind and may still require a hysterectomy in the weeks that follow delivery. Patients may also be at increased risk of recurrence. Until long-term outcomes are available, conservative approaches to preserve fertility are not routine practice. Most often, conservative management is considered as a means to avoid immediate complications.

For more information about the Complex Obstetric Surgery program, call 410-328-2993.