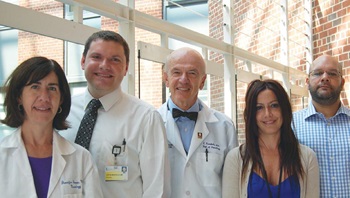 A group of neurologists at Maryland Epilepsy Center has raised the status of the University of Maryland Medical Center’s nationally regarded program and provided crucial guidance for practitioners by collaborating on a new guideline that’s the first to address treatment of a first seizure in adults.

The faculty members, led by Allan Krumholz, M.D., a professor of neurology at University of Maryland School of Medicine, conducted a comprehensive literature review indicating that immediate treatment with an antiepileptic drug lowers the risk of a second seizure by 35% within the first two years, when the risk of another such event is highest. While immediate treatment of a first seizure was shown to offer a short-term benefit, it doesn’t change the odds of remaining seizure-free over the longer term of more than three years, according to the guideline, of which Dr. Krumholz was the lead author.

Sponsored by the American Academy of Neurology and American Epilepsy Society, the new practice guideline was published last April in the journal Neurology and presented at the AAN’s 67th annual meeting in Washington, D.C. Other members of the UMMC team include neurologists Jennifer Hopp, M.D.; Ana Sanchez, M.D.; and neurology resident Justin Martello, M.D.

A previous guideline, also authored by Dr. Krumholz and Dr. Hopp, addresses how to evaluate a first seizure in adults. The new guideline rounds out four such documents commissioned by the AAN and “forms a nice resource for neurologists and other practitioners as well as patients themselves,” Dr. Krumholz explains.

“I think this new guideline really reviews the evidence for treating someone with a first seizure well,” he adds. “It’s important that people understand the risk of another seizure occurring and the fact that antiepileptic drugs can help, though over the long term they may not prevent the development of chronic epilepsy.”

About 150,000 American adults experience their first seizure each year, with about half of all such seizures having no known cause. Half of the adults suffering a first seizure will go on to have another, and 1 in 26 Americans will develop epilepsy, which is defined as one or more unprovoked seizures with a high likelihood of recurrence, in their lifetime.

But even a single seizure can be traumatic, impacting many aspects of an adult’s life such as job options and ability to drive, Dr. Krumholz notes.

“This guideline just reviews existing evidence, but there’s a lot more we’ve identified that needs to be done,” he says. “For example, if I start someone immediately on an antiepileptic drug, how long should that person be treated? It may vary from individual to individual — some don’t like taking medications and some are very afraid of having another seizure, which can interfere with the ability to work or drive. So we think these are individual decisions.”

Dr. Krumholz proposed the topic for the new guideline several years ago to AAN officials, who then asked him and his team to follow through. Among other findings, the literature review of 47 relevant studies with strong evidence indicated:

Side Effects Common, But Manageable

The new guideline did not discern which antiepileptic medications are more effective than others, but Dr. Krumholz says it does provide perspective to help practitioners understand how drug side effects may affect patients. While up to a third of patients suffer issues such as dizziness or sleepiness from their medications, most side effects are mild and can be reversed when a patient is switched to another drug or the dose is lowered.

“We know that some medications really shouldn’t be used in women of childbearing potential, for instance, because of risks to the baby,” he explains. “Others affect thinking and cognition, and if a patient is already impaired in that way, we stay away from using those. Every medication has its own side effects — the one you pick is the one that is most consistent with an individual’s life situation.”

But first, and above all, practitioners need to determine whether a patient has indeed experienced a seizure or another similar-appearing phenomenon, such as fainting, a confusional episode or even psychological problems, Dr. Krumholz says.

“We try to be sure they’ve had a seizure by doing a brain imaging study, EEG, physical exam and other tests,” he says. “The next step is to make sure a person hasn’t had seizures before. Sometimes, during our evaluation, we find the person had seizures before that so-called first seizure. It’s important to know, because we do advise starting that person on immediate medication when they’ve had a history of more than one seizure.”

“We hope this isn’t just directed at specialists who see patients, but disseminated to practitioners who see patients on the front lines and more importantly, to patients as well,” he says. “And we think it’s important for physicians to understand that this shouldn’t be a paternalistic process. It’s a nice model for how physicians and patients should interact.”

In addition to being satisfied with the results of his team’s hard work, Dr. Krumholz also feels the effort has set Maryland Epilepsy Center apart both regionally and nationally.

“This is a big focus of our Center, how to best treat patients with epilepsy,” he says. “We’re a good, solid resource for the care of people with seizures. I think this process makes us more sensitive to their needs and how to best manage them.”