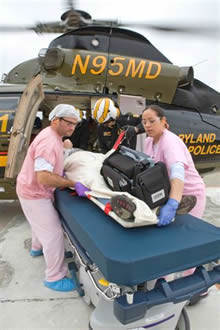 BALTIMORE — Approximately 1,500 people gathered tonight for the annual R Adams Cowley Shock Trauma Center Gala to honor those who are "Answering the Call." The event at the Baltimore Convention Center paid tribute to 86 Emergency Medical Services (EMS) personnel and medical heroes who represent Maryland's unique, highly coordinated trauma system. The night's festivities marked the return of the Gala after its cancellation in April 2015 out of respect for first responder availability during Baltimore's unrest.

Those in attendance heard the remarkable stories of Marcus Harcum, a 22-year-old critically wounded in a violent stabbing on his college graduation day, and Casey Bellofatto, an 18-year-old heroically pulled from her burning car minutes before it exploded.

"It's a privilege to care for patients and their families when life is on the line," says Thomas M Scalea, MD Physician-in-Chief, R Adams Cowley Shock Trauma Center, and the Honorable Francis X. Kelly Distinguished Professor of Trauma Surgery at the University of Maryland School of Medicine. "The incredible stories of survival and recovery that were shared this evening would not have been possible without the collaboration of partners — EMS team members, police officers, firefighters, nurses and medical specialists — who together make up Maryland's safety net for our most critically injured and ill."

On May 17, 2014, Marcus Harcum was celebrating with friends in Towson after graduating from Morgan State University with an engineering degree. But the joy was violently interrupted when he was stabbed in the chest four times. Baltimore County EMS personnel rushed a barely-breathing Marcus to Shock Trauma.

To save Marcus's life, doctors had to remove his badly damaged lung – a dangerous operation for anyone, but even more so for a patient so critically sick and unstable. Despite the complexity of his life-threatening injuries, Marcus surprised everyone by leaving Shock Trauma after 35 up-and-down days. He holds the Shock Trauma record for the quickest recovery from a traumatic pneumonectomy, and his case now represents the standard of care for his type of injury. Marcus was then discharged after only two days at the University of Maryland Rehabilitation & Orthopaedic Institute.

Marcus, who receives ongoing support from Shock Trauma's Violence Prevention Program to help him recover from the emotional impact of being a victim of violence, now works as an engineer at the U.S. Patent and Trademark Office.

Casey Bellofatto doesn't remember getting behind the wheel of her car nor the accident that took her legs. But Sgt. Craig Ream of the Howard County Police Department remembers it all too well. He was on his way to work when he came upon a badly damaged vehicle in Sykesville. After checking on the driver, he noticed another car -- Casey's -- in a ravine nearby. The car was on fire. Risking his own life, Sgt. Ream ran toward the fire. Minutes later, Carroll County Sheriff Corporal Gunnar Burdt arrived at the scene and he too risked his own life to help Sgt. Ream pull Casey from the car, mere moments before the gas tank exploded.

Casey's legs were charred, she had a fractured pelvis and signs of neurological damage. Over the next three days at Shock Trauma, Casey underwent multiple surgeries and procedures, suffering several significant setbacks with infections and bleeding. Her legs had to be amputated high above the knee, screws were placed in her pelvis, and her carotid arteries were rebuilt. Only then was she stable enough to be transferred to the burn unit at Johns Hopkins Bayview, where she remained for 59 days of grueling treatments, including wound debridement and grafting surgeries to cover her extensive burns.

Casey's rehabilitation has been arduous and long, but she endures. She now works with Shock Trauma's Center for Injury Prevention and Policy, speaking to area high school students about the dangers of impaired and distracted driving -- paying it forward by "Answering the Call" like the officers who saved her. 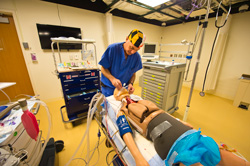 Funds raised by the Gala in part benefit the Center for Critical Care and Trauma Education at Shock Trauma, home to a 10,000-square-foot medical simulation area where medical professionals can train for real-life scenarios found in the hospital. Designed to mimic actual patient care and operating rooms, the simulation center supports the development, implementation, and continuous evaluation of courses related to trauma and critical care management.

"Tonight we celebrate the support of our generous donors who have "Answered the Call" by raising millions of dollars to support Shock Trauma's mission over the years," says Senator Francis X. Kelly, chairman, Shock Trauma Board of Visitors. "I encourage others who believe in this institution to pledge to "Answer the Call" as well."

To learn how you can support the mission of Shock Trauma, visit the University of Maryland Medical System Foundation at www.ummsfoundation.org/stc.

The R Adams Cowley Shock Trauma Center at the University of Maryland Medical Center was the first fully integrated trauma center in the world, and remains at the epicenter for trauma research, patient care, and teaching, both nationally and internationally today. Shock Trauma is where the "golden hour" concept of trauma was born and where many of the life-saving practices in modern trauma medicine were pioneered. Shock Trauma is also at the heart of Maryland's unparalleled Emergency Medical Service System.

The University of Maryland Medical Center (UMMC) is comprised of two hospitals in Baltimore: an 800-bed teaching hospital — the flagship institution of the 12-hospital University of Maryland Medical System (UMMS) — and a 200-bed community teaching hospital, UMMC Midtown Campus. UMMC is a national and regional referral center for trauma, cancer care, neurocare, cardiac care, diabetes and endocrinology, women's and children's health, and has one of the largest solid organ transplant programs in the country. All physicians on staff at the flagship hospital are faculty physicians of the University of Maryland School of Medicine. At UMMC Midtown Campus, faculty physicians work alongside community physicians to provide patients with the highest quality care. UMMC Midtown Campus was founded in 1881 and is located one mile away from the University Campus hospital. For more information, visit www.umm.edu.