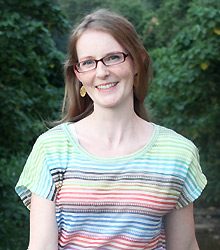 Dr. May Blanchard was an answer to my prayers. I was living overseas when I first learned of Dr. Blanchard and her robot-assisted surgery to remove uterine fibroids. I had just had my second child. During my pregnancy my fibroid grew so large that it was impossible to have my baby naturally. After a very complicated C-section I was told that I would probably have to have a hysterectomy to remove the fibroid. I had such a mix of emotions. Here I had this beautiful baby boy and at the same time I was being told that I would probably never be able to have children again.

I discovered Dr. Blanchard though a close friend and a month later I was home in the States and on my way to meet her. What impressed me most was her openness and respect. Most people go to the doctors expecting to be told what to do. She took the time to listen to my story and then asked me what I thought. I talked to her about what I had read online and she confirmed my findings and then elaborated with her own thoughts. It was nice to feel validated. She was so easy to talk to, and was calm and patient. Talking about giving up your womb is not an easy thing, but she was supportive.

After the testing was done Dr. Blanchard told me what she thought and then told me what some other options were and really encouraged me to play them out -- go to the doctors, do a little bit of research and make an educated decision. Once my decision was made I went back her and we began planning the surgery -- a robot-assisted hysterectomy. She answered all of my questions and said at one point "I find that a lot of my patients ask..." She really wanted to make sure we had talked through everything.

On the day of the surgery I was so nervous. I was leaving a three-month-old and my three-year-old with my sister to go in for major surgery. Dr. Blanchard's team could not have been more compassionate. They listened, consoled and reassured me. She had a new medical student on her team that day and he was so natural, like an old pro. I felt cared for. The surgery went well. Dr. Blanchard removed a seven-pound fibroid. The aftercare was great. When I went in for my follow-up appointment I told Dr. Blanchard how grateful I was to have found her. My son just turned one in March and in July it will be a year since I had my hysterectomy. I feel strong and able. I made the right decision and was very blessed to have Dr. Blanchard's support.