Brandy Firth: A Life-Threatening Condition Turns One Mother into a Red Cross Warrior 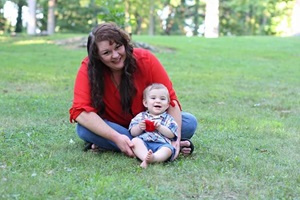 Brandy Firth, a 37-year-old mother, had three prior C-sections when she was diagnosed with placenta accreta in 2013. Placenta accreta is a condition that occurs when the placenta attaches too deep in the uterine wall. Women at greatest risk are those who have had a previous C-section.

“Placenta accreta is a potentially life-threatening condition with about seven percent of women dying, particularly in developing regions,” says Ozhan Turan, MD, PhD, FACOG, director of Complex Obstetric Surgery at the University of Maryland Medical Center (UMMC) and associate professor of Obstetrics, Gynecology and Reproductive Sciences at the University of Maryland School of Medicine.

Mrs. Firth knew that she was facing a seven percent mortality rate, but Dr. Turan’s advanced training and years of experience performing the most difficult surgeries on pregnant women gave her some comfort going into surgery.

As often occurs during planned cesareans for placenta accreta, Dr. Turan was unable to save Mrs. Firth from a hysterectomy. The placenta had attached too deep into Mrs. Firth’s uterus and the risk of additional blood loss was too high. She had already lost a lot of blood and ultimately needed seven units of red blood cells during surgery.

“While I sometimes feel sad knowing that I can’t have more children, I’m grateful to be alive and to be a mother to my other children and my newest little boy,” says Mrs. Firth. “I am forever thankful for Dr. Turan and his team for being so well trained and very prepared for my delivery. I could not have been in a better place or had a better team taking care of me and my son. My nurses in particular were so generous with their time. They sat with me even after their shifts had ended and they took pictures of my baby being born which meant the world to me since I was under general anesthesia during the birth.”

Mrs. Firth was so overcome after her experience that she began volunteering and organizing blood drives for the Red Cross. She even threw her son’s first birthday party at her local Red Cross. “Donating blood really is the gift of life,” she adds.