On the national level, Dr. Kirschling served on the American Association of Colleges of Nursing Board of Directors from 2004 to 2014, serving as its president from 2012 to 2014. Her clinical expertise is in mental health nursing with a focus on end-of-life care. For more than a decade, she has been focusing on workforce development.

Dr. Kirschling is an alumna of the AACN-Wharton Executive Leadership (2013) and Robert Wood Johnson Foundation Nurse Executive (2000–2003) fellows programs. She was inducted as a fellow in the American Academy of Nursing in 2009.

Dr. Doyle is senior vice president of patient care services and chief nursing officer (CNO) at the University of Maryland Medical Center (UMMC). She has more than 35 years of nursing experience, 15 of which in roles related to key emergency nursing, care management and patient experience initiatives at UMMC.

As CNO, Dr. Doyle serves as a member of the senior leadership team, overseeing nursing practice, patient outcomes and research at UMMC Downtown Campus. She brings a broad array of experience as a proven, transformational leader who has provided innovative patient experience solutions and adheres to high standards of practice across clinical settings.

Dr. Doyle holds a Doctor of Nursing Practice degree from the University of Maryland School of Nursing (UMSON) and a Master’s of Business Administration degree from Loyola University, Baltimore. She serves as a faculty associate professor at UMSON. She is also an American Academy of Nursing fellow and serves on the Mount Washington Pediatric Hospital Center’s Board of Directors.

Dr. Rowen is chief nurse executive at University of Maryland Medical System (UMMS), a 13-hospital health system. She leads UMMS’ nursing practice, standards of care initiatives, nursing professional development and partnerships with nursing schools. She was senior vice president for patient care services and chief nursing officer at University of Maryland Medical Center (UMMC) from 2007 to 2021, during which time she oversaw 5,500 nurses, advanced practice nurses and other health professionals.

Before coming to UMMC, Dr. Rowen was director of surgical nursing at The Johns Hopkins Hospital, where she began her career as a surgical nurse, and vice president of patient care services at Mercy Medical Center. An American Academy of Nursing fellow, she was previously co-chair of its Diversity and Inclusion Committee.

Dr. Rowen has published more than 75 articles on topics related to patient safety, teamwork and communication, health-related issues, and best practice standards. She has served as editor-in-chief of a surgical nursing journal and is a peer reviewer for several other journals. She has twice served as an expert reviewer for the NIH Clinical Center and serves on The Joint Commission’s Chief Nursing Executive Advisory Council.

As the principal investigator for a study funded by the American Organization of Nurse Executives, Dr. Rowen studied leadership development and patient outcomes, areas she now and now presents frequently on. She is an adjunct professor at University of Maryland School of Nursing (UMSON) and also holds faculty appointments at the University of Virginia and Johns Hopkins University.

Dr. Rowen is an inductee in The Daily Record’s Circle of Excellence, an honor bestowed to three-time honorees on The Daily Record’s Maryland’s Top 100 Women list (Dr. Rowen was included on the Maryland’s Top 100 Women lists for 2009, 2011 and 2013). In addition, she was an inaugural recipient of UMSON’s Visionary Pioneer Award, given to outstanding alumni who have significantly impacted and contributed to the nursing profession based on entrepreneurship, innovation and leadership.

In 2017, UMMS created an endowed scholarship in Dr. Rowen’s honor. In 2019, the University of Delaware honored her with its Alumni Star Award.

Dr. Galik is a professor and chair of University of Maryland School of Nursing’s (UMSON) Department of Organizational Systems and Adult Health. As a nurse practitioner, she specializes in improving care practices for older adults with dementia and their caregivers.

Dr. Galik continues to provide direct patient care to older adults with dementia and support their caregivers in assisted living facilities. She also has developed a house call practice for management of dementia symptoms. She is editor-in-chief of Caring for the Ages and is a past president of the Gerontological Advanced Practice Nurses Association.

Dr. Galik is a Scientific Review member of the National Institute on Aging. Additionally, she has served as an expert advisor for the Centers for Medicare and Medicaid, a role in which she worked to improve behavioral health and reduce the inappropriate use of antipsychotics in both long-term care and acute care settings.

Dr. Raymond is the vice president of nursing and patient care services for emergency services, oncology, medicine and psychiatry at University of Maryland Medical Center's (UMMC) Downtown and Midtown campuses. In this role, he is responsible for the strategic planning, operational management, quality of care/service delivery and outcomes of these areas. Prior to his role as vice president, he was vice president of neurosciences, psychiatry, and clinical practice and professional development. He has held UMMC progressive leadership positions including director of neurosciences and psychiatry and manager of the surgical intensive care unit.

Dr. Raymond is an appointed board member of the Maryland State Board of Nursing. He holds a faculty associate appointment at University of Maryland School of Nursing (UMSON) in the Department of Organizational Systems and Adult Health. He is also co-chair of UMNursing.

Dr. Raymond’s academic preparation includes a Doctorate in Nursing Practice degree from UMSON; a Master of Science degree in leadership and management from UMSON, where he also obtained his Bachelor of Science in Nursing degree; and a Master of Business Administration degree from the University of Baltimore Merrick School of Business. He has nurse executive advanced board certification (NEA-BC) from the American Nurses Credentialing Center. He holds a teaching certificate in nursing and health care professions from UMSON and nursing leadership certification from the University of Pennsylvania’s Wharton School of Business. 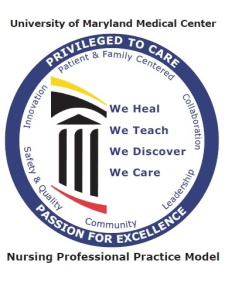