These Genes Could Serve as Potential Targets to Reduce Cardiovascular Risk

Baltimore, Md. – Researchers at the University of Maryland School of Medicine (UMSOM) have uncovered genetic mutations that may explain why people with high levels of high-density lipoprotein (HDL) cholesterol, the ";good cholesterol," have a reduced risk of coronary heart disease.

High HDL levels are associated with longevity in families, suggesting the possibility of a genetic connection. HDL also has antioxidant and anti-inflammatory properties that may contribute to heart protection.

To home in on the genetic connection, the researchers examined large-scale heart disease databases and focused on patients who had been screened with an extensive genetic test.

The researchers say their findings, published in the Journal of Clinical Lipidology, could open the door to new ways to reduce cardiovascular risk. 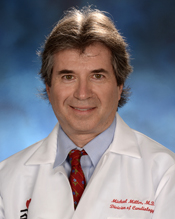 "We tried to identify novel genes associated with very high HDL, found about a hundred genes that could have fit the pattern, then eliminated most of them because they were also found in people with low HDL," says the study's senior author, Michael Miller, MD, professor of cardiovascular medicine, epidemiology & public health at UMSOM, and director of the Center for Preventive Cardiology, University of Maryland Medical Center. "Ultimately, we found eight genes that may somehow protect the heart, even though seven of them have not been specifically linked to HDL metabolism."

HDL levels are expressed in milligrams per deciliter (mg/dL) of blood. The typical number is 45 for men and 55 for women. This study looked at people with HDL levels of 80 mg/dL or higher, including well over 100. Extremely high HDL is known as hyperalphalipoproteinemia (HALP).

In some cases, the cardioprotective effect associated with HALP was unexpected.

"We were surprised to find that some of the high HDL patients who were smokers, had high blood pressure and were older, in their 70s or 80s, had not experienced a coronary event such as a heart attack," says Dr. Miller.

Dr. Miller says there are challenges in working with HDL.

"Think of HDL as a cargo ship that not only transports cholesterol for disposal (its most well-known function) but also contains at least 80 different proteins. The relationship between HDL and many of these proteins is not well understood," he says.

"This study is an important first step toward understanding whether there is anything more to these genes," says E. Albert Reece, MD, PhD, MBA, executive vice president for medical affairs at the University of Maryland, the John Z. and Akiko K. Bowers Distinguished Professor and dean of UMSOM. "For example, these genes may affect lipid metabolism in ways that have not been understood previously. A related question is whether an effect on lipid metabolism also implies changes in the risk of heart disease."

The study was supported by grants from the National Institutes of Health.

Commemorating its 210th Anniversary, the University of Maryland School of Medicine was chartered in 1807 as the first public medical school in the United States. It continues today as one of the fastest growing, top-tier biomedical research enterprises in the world -- with 43 academic departments, centers, institutes, and programs; and a faculty of more than 3,000 physicians, scientists, and allied health professionals, including members of the National Academy of Sciences, and a distinguished recipient of the Albert E. Lasker Award in Medical Research. With an operating budget of more than $1 billion, the School of Medicine works closely in partnership with the University of Maryland Medical Center and Medical System to provide research-intensive, academic and clinically-based care for more than 1.2 million patients each year. The School has over 2,500 students, residents, and fellows, and nearly $450 million in extramural funding, with more than half of its academic departments ranked in the top 20 among all public medical schools in the nation in research funding. As one of the seven professional schools that make up the University of Maryland, Baltimore campus, the School of Medicine has a total workforce of nearly 7,000 individuals. The combined School and Medical System ("University of Maryland Medicine") has a total budget of $5 billion and an economic impact of nearly $15 billion on the state and local community. The School of Medicine faculty, which ranks as the 8th-highest public medical school in research productivity, is an innovator in translational medicine with 600 active patents and 24 start-up companies. The School works locally, nationally, and globally, with research and treatment facilities in 36 countries around the world. Visit medschool.umaryland.edu/