BALTIMORE – According to the AAA Foundation for Traffic Safety: 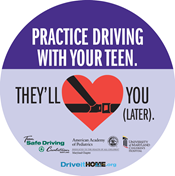 "As soon as schools are out for the summer, more teens will be on the roads," says Richard Lichenstein, MD, professor of pediatrics at the University of Maryland School of Medicine and director of pediatric emergency research at the University of Maryland Children's Hospital. "Research shows that the more driving experience a teen driver has with an adult driver, the less likely it is that they will get in a crash." Dr. Lichenstein also serves as chairman of the Maryland Teen Safe Driving Coalition.

"PRACTICE DRIVING WITH YOUR TEEN. THEY'LL ♥ U (LATER)."

"Teens crash more because they are inexperienced," says Lahila-Carina Ojeda, MD, a pediatric medicine resident at University of Maryland Children's Hospital. "They struggle judging gaps in traffic, driving the right speed for conditions and turning safely, among other things."

Cliff Tompkins of Calvert County knows this issue all too well. On June 18, 2005, he and his wife, Barbie, and their three children were traveling on vacation. Having recently gotten her driver's license, 17-year-old Nicole was behind the wheel when she over-corrected to avoid a collision going 65 mph. The vehicle rolled and her 7-year-old brother was fatally injured.

"Driver's education only teaches teens so much," says Mr. Tomkins. "Yes, they are taught how to operate a car and the rules of the road. But parents must regularly practice driving with their teens so they can safely get the experience they need to avoid accidents."