Key Goal: To Promote Research Collaboration Among Faculty at UM SOM and other UMB Schools

Baltimore, Md., September 22, 2016 – The Institute for Global Health (IGH) at the University of Maryland School of Medicine (UM SOM) will hold its first Global Health Summit on September 26.

The event, which will take place from noon to 6 p.m. in the SMC Campus Center at 621 W. Lombard Street, will seek to foster collaboration among scientists and promote new and innovative global health research at UM SOM, as well as at other schools at the University of Maryland, Baltimore (UMB). Faculty and staff from UM SOM, as well as other schools are welcome at the event.

Among those who will speak at the event are IGH founding director Christopher Plowe, MD, MPH, FASTMH, the Frank M. Calia, MD Professor of Medicine, UM SOM Dean E. Albert Reece, MD, PhD, MBA, and Kathleen Neuzil, MD, MPH, FIDSA, who is director of the Center for Vaccine Development at IGH, as well as deputy director of IGH.

The event will include a range of presentations from departments at UM SOM. Participants will also have an opportunity to take part in small group discussions about strategies to promote global health research on campus. The topics will include promoting collaboration, expanding research to non-communicable diseases and creating opportunities for knowledge transfer.

“We’re doing fantastic research already,” said Dr. Plowe. “But we want to spread the word among our entire UM SOM faculty, and UMB as well, that we’re eager to work together across disciplines. Global health encompasses so many areas that we can do much, much more. So we need partners.”

IGH was established in 2015, bringing together an impressive team of researchers with decades of experience in a variety of areas, including vaccines, malaria, and emerging diseases. The institute focuses on vaccine development and malaria research, and consists of the Center for Vaccine Development (CVD) and the Division of Malaria Research (DMR).

A surveillance program for malaria among pregnant women in Myanmar, led by IGH researcher Myaing Nyunt.

For more than 40 years, the CVD has conducted research on vaccines for a variety of diseases, including cholera, typhoid fever, malaria, Ebola, Zika and other infectious illnesses. The center focuses on maternal and child mortality, especially on preventing diarrhea and pneumonia, which are leading causes of death in children under five around the world. Earlier this year a single-dose cholera vaccine developed by CVD scientists became the only cholera vaccine licensed for use in the United States.

With the ultimate aim of global malaria eradication, DMR focuses on the prevention and treatment of malaria, which infects 200 million people a year. It develops and deploys innovative tools for malaria treatment, prevention and surveillance. Working in its Baltimore laboratories and at field sites in Mali, Burkina Faso, Malawi and Myanmar, it designs and leads clinical trials of drugs and vaccines, and applies molecular and genomics approaches to track drug resistance and malaria transmission.

Dr. Plowe, who has been studying malaria for more than 30 years, joined the CVD faculty in 1995, building a multidisciplinary malaria research group that works around the world. Dr. Neuzil, an expert in the study of vaccines, was previously a professor at the University of Washington, and directed vaccine access and delivery at PATH, an international nonprofit global health organization based in Seattle. 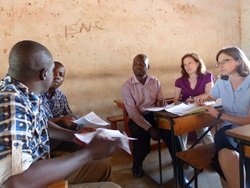 In Malawi, IGH researchers Lauren Cohee and Miriam Laufer meet with school leaders and research staff to plan a study to treat children for malaria in schools.

IGH has already had several successes. Last year, Dr. Plowe and his colleague and wife, Myaing Myaing Nyunt, MD, MPH, PhD, assistant professor of medicine and director of IGH’s efforts in Myanmar, helped engineer an unprecedented meeting to battle malaria in Myanmar. A diverse array of groups in the country, many with long histories as adversaries, met in Washington D.C. to discuss strategies to eradicate malaria in Myanmar. The groups agreed to cooperate on a long-term plan to eliminate malaria, which is a major problem in many parts of the country.

IGH also focuses on developing the skills and expertise of those abroad who are on the front lines in the war against infectious and other global diseases. This spread of technical and scientific knowledge will allow less developed countries to create sustainable improvements in public health, which last beyond the end of studies by researchers at western institutions.

The University of Maryland School of Medicine was chartered in 1807 and is the first public medical school in the United States and continues today as an innovative leader in accelerating innovation and discovery in medicine. The School of Medicine is the founding school of the University of Maryland and is an integral part of the 11-campus University System of Maryland. Located on the University of Maryland’s Baltimore campus, the School of Medicine works closely with the University of Maryland Medical Center and Medical System to provide a research-intensive, academic and clinically based education. With 43 academic departments, centers and institutes and a faculty of more than 3,000 physicians and research scientists plus more than $400 million in extramural funding, the School is regarded as one of the leading biomedical research institutions in the U.S. with top-tier faculty and programs in cancer, brain science, surgery and transplantation, trauma and emergency medicine, vaccine development and human genomics, among other centers of excellence. The School is not only concerned with the health of the citizens of Maryland and the nation, but also has a global presence, with research and treatment facilities in more than 35 countries around the world. http://medschool.umaryland.edu/