As we mark Saturday’s 46th anniversary of the first medevac mission completed by the Maryland State Police, we reflect on a few of the accomplishments the MSP Aviation Command has achieved.

The Maryland State Police Aviation Division medical mission profile began in November 1960 with the acquisition of a Hiller UH12E helicopter. This aircraft was used primarily for police missions, however a medical “support” profile was soon established and thus began the idea of medical evacuation for the citizens of Maryland. 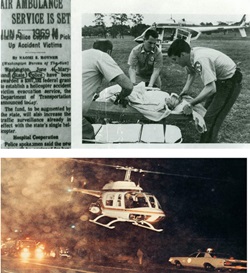 Although systematic medical care was not provided on board, this aircraft transported medical patients such as heart attack victims and expectant mothers following severe snowstorms. Medical rescues were performed with the Hiller as early as 1966, but not under a complete system of enroute care.

Within a few years, that concept would come to life. Dr. R Adams Cowley, perhaps best known for being the father of the “Golden Hour” concept in trauma medicine, collaborated with MSP Pilot Robert Y. Wolfe and other Maryland leaders to close the most significant gap in trauma care.

On March 19, 1970 at 11:20 am, the first “Medevac” was completed under a complete system of enroute medical care. Originally called “Helicopter 108”, pilot Corporal Gary Moore and Trooper First Class Paul Benson responded to a traffic accident on the Baltimore Beltway (Interstate 695) and Falls Road and transported a patient to what was then known as the Center for the Study of Trauma, now known as the University of Maryland R Adams Cowley Shock Trauma Center, in a Turbine powered Bell Jet Ranger aircraft. 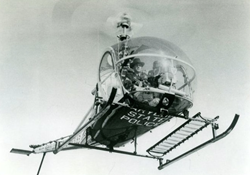 On that day, MSP formally expanded its role into the world of emergency medical services (EMS). That medevac mission marked the first time a civilian agency transported a critically injured trauma patient by helicopter; never before had this been done in a non-military setting.

Since that time, many changes have occurred to improve what today is called the Maryland State Police Aviation Command and the Maryland medevac system. MSP and Shock Trauma have earned a worldwide reputation as leaders in trauma care.

The procurement of the AS365 Dauphin helicopters in the late 1980s provided additional enhancements for the fleet, such as increased speed, the added safety component of two engines, and additional space to accommodate two patients.

In 2013, the Maryland State Police began flying the latest and greatest technology in the form of the AgustaWestland AW139 helicopters. Additional safety measures were incorporated, along with the addition of a second pilot and a second medical provider to the standard flight crew.

More than 148,000 patients have been transported since that day in March 1970. The Maryland State Police Aviation Command, in conjunction with other medical partners around the State, and with the continuing support of our citizens, their government representatives, and other stakeholders, have made the Maryland Medevac system a success story for many patients and their families.