When Kathleen Dobbs of Odenton, Maryland was 14 years old, she was diagnosed with primary sclerosing cholangitis (PSC), a condition which causes the bile ducts in and around the liver to deteriorate. From that point on, Kathleen had to be careful of what she put on her skin, inhaled, and ingested because it would have to be filtered through her failing liver. At the time of her diagnosis, she was told that she would eventually need a liver transplant, most likely within 10 years.

Originally from Minnesota, Kathleen and her husband moved to Arizona to pursue teaching positions, but her husband was soon recruited into the military. The couple relocated to Germany, where they adopted a son, Joseph. Kathleen's health was progressively getting worse, however, and her doctors told Kathleen that the time for a liver transplant was nearing. In order to provide Kathleen with the best possible care, the military transferred her husband to Fort Belvoir in Virginia so that Kathleen could see physicians at Walter Reed National Military Medical Center in Bethesda, Maryland.

At first, Kathleen was adamant that she undergo a traditional transplant. Uncertain of the outcome for living donors, Kathleen did not want to be responsible for putting a family member's health in jeopardy. The reassurance from the transplant team about the minimal long-term effects to donors encouraged Kathleen to consider a living donor transplant. Meanwhile, her health was continuing to decline, and she stopped responding to treatment. Against her wishes, Kathleen's two older brothers traveled from Minnesota and were tested to see if they were a match to donate a portion of their liver to their sister. Kathleen's brother Benjamin was a match. A heartfelt conversation between Kathleen and Benjamin was what Kathleen needed to make her decision, and 15 years after her PSC diagnosis, Kathleen underwent a living donor liver transplant at UMMC.

Following the procedure, Benjamin told Kathleen, "I gave you my liver, now you have to live life to the fullest." And that is just what Kathleen has been doing. After recovering at home for just one week, Kathleen felt that she and her family needed to move on. She slowly worked on getting her stamina back and within a few months, she was going on hikes with her husband and Joseph, who is now three years old.

Kathleen has also taken it upon herself to educate people about living donor transplants and the importance of organ donation. In April 2013, Kathleen dyed her hair green to celebrate Donate Life month, an initiative sponsored locally by The Living Legacy Foundation. The drastic change was motivated by her desire to find a way to talk to people about organ donation. An easy-going and energetic person, Kathleen takes every opportunity to tell people about her transplant and finds it comical when people assume that her brother is no longer living because of his donation. She uses the misunderstanding to educate others about living donor transplants and considers her efforts a success if she can get just one person to sign up to become a donor. 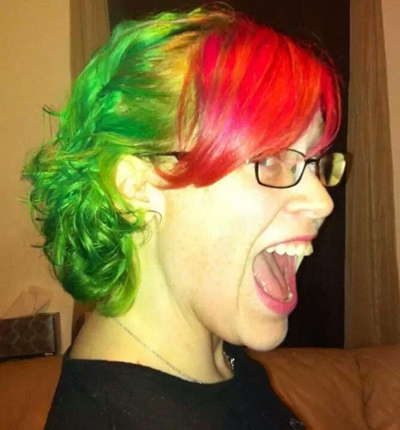 "Donate to someone to save their life and keep on living yourself," urges Kathleen. "I have seen so many that needed organs at a young age. Everyone deserves the chance to live life to the fullest. Organ donors do that."

To refer a patient or get more information, please call 1-800-373-4111. A physician service representative from Consultation and Referral Services will direct your call to the appropriate physician or department.

For more details, please visit our section for referring physicians.