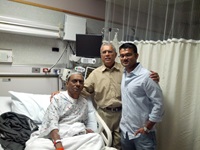 Bharat Patel of Salisbury, Maryland was diagnosed with liver failure in March 2010. His family, a wife and three grown sons, watched as his health began to decline and he had to come to grips with his own mortality. They were told that a liver transplant could be an option, but first he would need to make some serious life changes, including cutting out all alcohol.

The entire family was affected by Bharat's failing health. As is often true for families with a sick loved one, the sons and their mother became consumed with caring for Bharat. His boys struggled with how to help their father in the midst of managing major developments in their own lives, including a move to Michigan for one son and completion of pharmacy school for the youngest son, Nikunj.

In January 2013, Nikunj recognized significant lifestyle changes in his father and began to secretly consider becoming his father's living liver donor. Giving his dad a portion of his liver would give his father a second chance at life and would free his family from the physical and emotional burdens they'd been enduring for three years as they watched their father and husband deteriorate.

Without telling his father of his plans, Nikunj approached the living donor liver transplant team at UMMC in early February 2013 and requested to be tested as a potential match for his father. After completing a series of lab tests and a liver biopsy, Nikunj was approved as a match for his father in late May.

In a twist of fate, Bharat fell ill and was admitted to Peninsula Regional Medical Center just after Nikunj had learned he could be a donor. This was the time.

Nikunj approached his father and said, "I'm going to be your living donor."

Bharat was humbled by the offer but refused to let his son risk any surgery for his own benefit. Nikunj had done his research and felt that the University of Maryland was the best place for him to have their living donor liver surgery and get his family's lives back on track.

Bharat was transferred to the University of Maryland Medical Center on May 31 and received the approval to proceed with a living donor liver transplant from his son. Their donation and transplantation surgeries occurred on June 5.

Nikunj saw his father in the hospital on day three after the transplant and said his dad was very emotional and grateful. When asked how it felt to have his son give him new life, Bharat said, "I am very proud of my son. I am proud of all my sons," as tears gathered at the corners of his eyes.

Just four weeks after donating 60% of his liver to his father, Nikunj traveled to the island of Curacao to attend a wedding with friends. Five weeks after his donation surgery, he moved to Indianapolis for a fellowship in Regulatory Intelligence & Drug Development through the Visiting Scientist Program with Eli Lilly and Company.

When asked how this living donation experience will influence his future as healthcare professional, Nikunj said, "I try to always carry my personal experiences with me to help me relate to other people. Today there are thousands of patients on the transplant list awaiting a second chance at life. I hope our story inspires others to follow suit."

To refer a patient or get more information, please call 1-800-373-4111. A physician service representative from Consultation and Referral Services will direct your call to the appropriate physician or department.

For more details, please visit our section for Referring Physicians.