A few months before my surgery at the Maryland Heart and Vascular Center, I could tell there was something wrong. I felt tightness in my chest. In general, I didn't feel that great, I felt run down and overextended. I had felt this way off and on for a couple of months, so I went to the hospital for a stress test. Then my doctor (in Chestertown, MD) performed a catheterization. I didn't have a heart attack, but it turns out that my aortic valve had degenerated and one of my arteries was 95% clogged. I was about ready to conk out!

My doctor said "you are not walking out of this hospital." He said he had already called a cardiac surgeon at the UM Medical Center and had made all of the arrangements. He said I needed to go to the University of Maryland Medical Center right away and that they could operate on me that Monday morning, which is what I did.

Everybody at UMMC was so nice and supportive. One of the nurses even took me to talk to an older patient who had also had the aortic procedure done. He was calm and told me not to worry. By Sunday night I was nervous, but I wasn't nervous on the morning of my surgery. I had my surgery Monday morning and woke up Monday night about 7:30 p.m. By Tuesday morning they had me up and walking and by Friday I went home.

I had just turned 60 when I had the aortic valve replacement and coronary artery bypass operation.

I have felt better in the last two years than I've ever felt in my whole life. One of the reasons I feel better is regular exercise. Before the operation it was hard to exercise because of my schedule. But after the operation I changed my priorities. Now I exercise on a regular basis.

A month after the surgery, I joined a cardiac rehabilitation program. I go for two hours, three times a week. The doctors at the Medical Center pulled me through and saved my life, so I owe it to them to try to keep myself healthy.

After the surgery, my surgeon prescribed medications for my blood pressure and cholesterol. I also cut down a lot on sugar and I started looking at labels for sodium content. I became more health conscious. It makes a difference; I have more of an awareness now of what I'm eating.

I could not think of adequate words to describe how I feel about the University of Maryland Heart Center. I just couldn't ever thank all of them enough. I have never had so many nice things to say about the cardiac care unit and the Medical Center as a whole.

Everybody was so friendly and encouraging. All of the staff members (not just the doctors and nurses) were so nice.

One of the things that amazed me is that everybody at the Medical Center was so friendly -- from the people emptying trash and the orderlies to the nurses and doctors. They all seemed to be genuinely interested in helping out.

It really felt like a hotel, not a hospital. Everyone was friendly and pleasant, and they took very good care of us. It was great.

Garry said one of the nurses arranged for him to talk to a man who had a valve replacement. The man answered many of Garry's questions. The nurse realized he was nervous, and that talking to another patient would help.

One of the nurses came in the morning Garry was leaving and said she wanted to wish him well and cheered him on. I was impressed she did that. They couldn't have been nicer.

Overall, it was a wonderful experience. If we ever had another health problem, I would go back again to the Medical Center again; it would be our first choice. 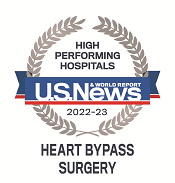