Doctors now have more tools than ever to diagnose and treat breast cancer, thanks to scientific advancements throughout the past decade in genetic testing and clinical trials. The University of Maryland Cancer Network is at the forefront of these developments, giving patients across the state access to life-saving care.

About 5 to 10 percent of all breast cancers have a genetic cause. UM Cancer Network genetic counselors routinely test for 25 genes related to breast and gynecologic cancer, including:

"We're learning more and more that the lines between breast and gynecologic cancers are more blurred than we thought," says Rachel Gore, instructor for the Department of Pediatrics at the University of Maryland School of Medicine and genetic counselor at University of Maryland Baltimore Washington Medical Center's Tate Cancer Center.

For example, a mutation in the BRCA 1 or BRCA 2 genes means a woman has an increased risk of developing breast and ovarian cancers.

One of the newest advances for these patients is paired tumor and germline testing. UM Cancer Network hospitals conduct germline testing using blood or skin cells to determine if a patient has genetic mutations that could increase the risk of breast cancer. But now, hospitals can also genetically test cells from an ovarian cancer patient's tumor at the same time, Gore says.

Based on the results, some patients may be eligible for PARP inhibitors - a type of targeted therapy.

"The goal is to help clarify results that might otherwise be classified as uncertain and to potentially detect additional mutations that wouldn't be captured by traditional DNA testing," Gore says.

Also new: Polygenic risk score assessments for patients who have not had breast cancer but may be at risk. Technology examines more than 100 different markers in the genome and then combines it with details about everything from a patient's history of hormone exposure and number of children she's had to family history and previous breast biopsies. The result: a person's lifetime risk (in number form) for breast cancer, Gore says.

One of those trials, known as the Radiotherapy Comparative Effectiveness (RadComp) study, compares photon therapy and proton therapy. Both are FDA-approved radiation therapies used to treat breast cancer.

"With this nationwide study, we hope to better understand the long-term cardiac effects of radiation for breast cancer patients and to help them live longer, healthier lives following therapy," says Elizabeth Nichols, MD, associate professor of radiation oncology for the University of Maryland School of Medicine and clinical director of University of Maryland Department of Radiation Oncology.

The network is also conducting multiple trials related to GammaPod - the first radiation therapy system dedicated specifically to treat early-stage breast cancer. GammaPod delivers a higher dose of radiation to the tumor and less radiation to nearby vital organs such as the heart and lungs. It's also gentler on the skin and healthy breast tissue.

Doctors and scientists at the University of Maryland invented and developed GammaPod, which the U.S. Food and Drug Administration approved in 2017. UMGCCC is the first in the world to use the new technology to treat patients.

For more information about the network's clinical trials, please visit:

About the UM Cancer Network

With the NCI-designated UM Marlene and Stewart Greenebaum Comprehensive Cancer Center as its hub, the UM Cancer Network offers patients access to nationally-renowned experts, cutting edge treatments and technologies, and the latest clinical trials. UM GCCC was ranked #16 in the nation for cancer care in the 2019-20 US News and World Report's Best Hospital rankings. Learn more about the UM Cancer Network. 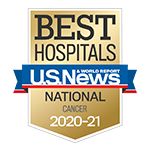