Dr. Bahrani completed his medical education at Wake Forest University School of Maryland in Winston Salem, NC. His post-graduate training includes an internal medicine internship and residency at Eastern Virginia Medical School and a Fellowship in hematology/oncology at Georgetown University.

Dr. Bahrani was also an instructor and Assistant Professor of Internal Medicine at East Virginia Medical School in the early 2000s. He is triple board certified in hematology, medical oncology and internal medicine and specializes in lymphoma and colon cancer cases. Dr. Bahrani has been named a top doctor in the 2015 through 2018 issues of Baltimore magazine.

Kevin J. Cullen, MD, specializes in head and neck cancer. A graduate of Dartmouth College and Harvard Medical School, Dr. Cullen completed his internship and residency at Beth Israel Hospital in Boston and received additional training at the National Cancer Institute. He served as interim director of the Lombardi Cancer Center at Georgetown University from October 2000 to September 2002 and was professor of medicine, oncology, and otolaryngology at Georgetown University School of Medicine until joining the University of Maryland in 2004.

Under his leadership, the University of Maryland Greenebaum Comprehensive Cancer Center received NCI Cancer Center designation in 2008, then achieved the comprehensive designation in 2016. Then in The center is ranked in the top 50 cancer centers in the country by U.S. News & World Report's "Best Hospitals" list. Dr. Cullen is a member of the American Cancer Society National Board of Directors, is on the board of directors of the Association of American Cancer Institutes, and was appointed by President Obama as a member of the National Cancer Advisory Board.

V. Dixon King, Jr., MD, MBA, received his BS in biology from Auburn University and his medical degree from the University of Alabama at Birmingham. He completed his residency in Anatomic and Clinical Pathology and a Fellowship in Medical Microbiology at the Johns Hopkins Hospital. He recently earned his MBA from the University of Massachusetts.

Dr. King has been a practicing pathologist for over 30 years with a special interest in breast, gastrointestinal and gynecologic pathology. At UM UCH, he serves as Chair of the Cancer Committee and the Breast Cancer Advisory Committee. He is also proud to be the Physician Champion of the UM UCH HPV Vaccination Initiative. He has served as President of the Maryland Society of Pathologists and currently serves as Vice President of the Medical staff at UM UCH. Dr. King is currently pursuing a Master’s of Science in Applied Statistics in Health Sciences from the University of Strathclyde in Glasgow, Scotland. He is an avid runner and runs the New York City Marathon each year to raise money for cancer research.

John A. Olson, Jr., MD, PhD, specializes in endocrine and oncologic surgery with an emphasis on endocrine malignancies and breast. His clinical research interests include development of biomarkers for breast cancer and the study of aromatase inhibitor therapy to improve surgical outcomes for post-menopausal women with breast cancer.

Previously serving as Chief of Endocrine, Breast, and Oncologic Surgery at Duke University Medical Center, he received his medical degree and doctorate in Pharmacology and Experimental Therapeutics from the University of Florida. He received his general surgery training at Washington University in St. Louis and completed a surgical oncology fellowship at Memorial Sloan-Kettering Cancer Center in New York. 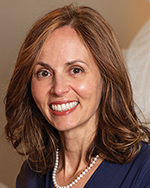 Kimberly Wyn Schlesinger, MD, has board certifications in hematology, medical oncology and internal medicine. A highly experienced cancer physician, she most recently served as medical director with the Riverside Tappahannock Cancer Care Center in Tappahannock, Virginia. Prior to that, she practiced at Hematology Oncology Associates of Fredericksburg; Peninsula Cancer Institute, where she was medical director of the Breast Cancer Program; and University of Pittsburgh Medical Center Cancer Centers.

Dr. Schlesinger completed her fellowship in hematology and medical oncology at the University of Pittsburgh School of Medicine, where she received her medical degree. She completed her residency in internal medicine at University of Virginia Health Sciences Center. She has been named “Top Doc” by Virginia Living magazine, Northern Virginia Magazine and Hampton Roads Magazine.