Of the approximately 14,000 patients currently awaiting a liver transplant, about 1 in 4 will die before they are matched with a donor liver. The demand for livers increasingly outpaces available donor organs, and therefore experts at the University of Maryland are dedicated to finding solutions such as living donor liver transplantation, in which up to 70 percent of a living donor's liver is removed and transplanted into the recipient, with the liver regenerating itself in both the donor and the recipient in about six weeks

Living donor liver transplantation enables a potential recipient to identify their own donor, before they reach the critical stages of liver failure that are often encountered prior to reaching the top of the waiting list. A living donor provides patients the opportunity to receive a transplant before their quality of life is compromised, when they are stronger and better able to withstand the rigors of a liver transplant. This leads to quicker recovery, and better overall survival.

Most of the nation's transplant centers do not offer this procedure, but today, 10 to 15 percent of the University of Maryland Medical Center's liver transplants involve a living donor. 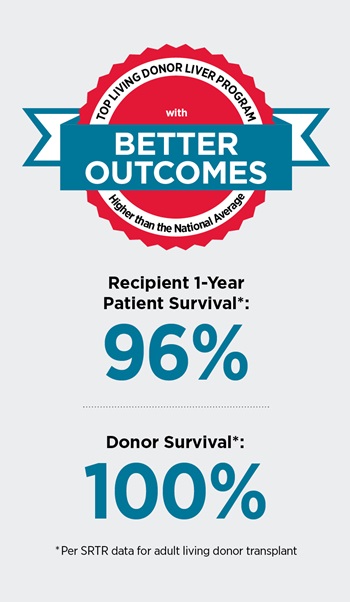 UMMC's stellar outcomes are especially noteworthy considering that its liver transplant program, which has the highest volume in the state of Maryland, is an outlier in its treatment of a very high proportion of medically underserved and severely ill patients. In calendar year 2017, nearly 65 percent of UMMC liver transplant patients were categorized as severely ill, a significantly higher percentage than those of other Mid-Atlantic transplant centers where less than half of recipients are categorized as severely ill.

UMMC also treats a high proportion of patients from disadvantaged socioeconomic backgrounds and has performed more liver transplants for African American patients than any other U.S. program over the past two calendar years. Even so, based on data collected from January 2014 through June 2016, in 2018 CareChex ranked UMMC's liver transplant program #1 in the United States both in terms of "Patient Safety" and "Medical Excellence."

The UMMC team has partnered with Anurag Maheshwari, MD, a transplant hepatologist with joint appointments at UMSOM and Mercy Medical Center, to offer patients a dedicated living donor hepatologist to create a seamless, robust, multidisciplinary approach to living donor transplantation.