TORS Can Improve Discovery of Carcinoma of Unknown Primary (CUP) 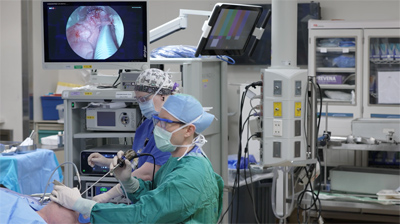 The rise in incidence of human papillomavirus-related oropharyngeal cancers has increased the number of cases of carcinoma of unknown primary (CUP), a metastasis to the cervical lymph node with an occult mucosal malignancy. Further complicating matters, the majority of patients with CUP present without symptoms such as dysphagia.

"These patients rarely come in with complaints," says Kyle M. Hatten, MD, associate professor and chief of robotic surgery in the Department of Otorhinolaryngology-Head and Neck Surgery at the University of Maryland School of Medicine. "Approximately 85 percent present with an isolated neck mass that is often appreciated by the patient or incidentally identified by their medical provider," he continues.

In a recent study conducted by Hatten and his colleagues at the University of Maryland Marlene and Stewart Greenebaum Comprehensive Cancer Center (UMGCCC), nearly 3 in 4 of patients with human papillomavirus-related oropharynx cancer had normal swallowing function at the time of diagnosis. When dysphagia was present, it was most often associated with large tumors.1 Due to the lack of symptoms many human papillomavirus-related malignancies have been challenging to diagnose; however, the medical community is increasingly becoming more aware and adept at recognizing them.

Diagnosing CUP and the Role of Transoral Robotic Surgery

Correctly diagnosing a neck mass often begins with a fine needle aspiration (FNA), if necessary with ultrasonic guidance. Contrast-enhanced CT or MRI, as well as PET/CT, may also assist in identifying the primary tumor; however, PET/CT imaging of the palatine tonsils and base of the tongue is associated with a high rate of false positives.

Even so, it is thought that about 9 in 10 occult primary tumors originate at the palatine tonsils and tongue base, areas with cryptic structures that render exploration through laryngoscopy challenging. If the primary tumor cannot be found, treatment involving radiation therapy to the entire pharyngeal axis along with concurrent chemotherapy becomes necessary. However, this approach is associated with high morbidity; one study showed mucositis in about 59 percent of patents that required esophageal strictures and stomach tube placement.2

"Before the use of TORS, only about 50 to 60 percent of patients had their occult primaries detected," says Hatten, who completed a robotic surgery fellowship at the University of Pennsylvania under Bert O'Malley, MD, co-inventor of TORS and now president and CEO at the University of Maryland Medical Center (UMMC) as well as Hatten's colleague in the UM Department of Otorhinolaryngology.

Robotic assistance – in part because of the ability it confers to operate in and around confined anatomical spaces and in part because of the high-resolution, three-dimensional view of the operative field it provides – can facilitate excisional biopsies of palatine tonsil, glossotonsillar sulcus and lingual tonsils, ultimately improving tumor detection. In a clinical study Hatten and others conducted, TORS helped surgeons detect 80 percent of occult oropharyngeal malignancies. 3 Today, the UMGCCC Head & Neck Cancer team finds the primary tumors in close to 90 percent of CUP cases.

TORS Improves CUP Treatment and Quality of Life for Patients

In addition to significantly improving the odds that the unknown primary will be found, TORS permits minimally invasive excision of the primary tumor and any affected lymph nodes. This can be done in the same surgical session. Patients often emerge from general anesthesia to find that not only do they have a confirmed cancer diagnosis, but their cancer has already been surgically treated – in some cases definitively. They go home on an oral diet and without a stomach tube. Most of these patients will not require chemotherapy and some can avoid radiotherapy. However, even those who need follow-up radiation will benefit from having a better-defined and smaller treatment field compared to the complete pharyngeal axis. These factors often combine to spare patients treated through TORS from much treatment-related morbidity.

Just as UMGCCC's head and neck surgeons strive to offer solutions that reduce treatment-related side effects, University of Maryland radiation oncologists are seeking the same with radiotherapy for HPV-related squamous cell carcinoma. Given that overall survival rates for this particular malignancy are high, UMGCCC researchers are investigating whether radiation treatment tissue volume can be carefully reduced by irradiating fewer elective nodes. In employing this strategy, it is hoped that xerostomia, dysphagia and the need for PEG-tube placement can be avoided while preserving the efficacy of treatment as measured by survival rates, locoregional control and the absence of metastases at two years.

The phase II trial of Selective Avoidance of nodal VolumEs at minimal Risk (20110GCC) (SAVER) in the contralateral neck (NCT04609280) is currently recruiting patients with p16-positive oropharynx cancer who require radiation treatment either as an adjuvant following TORS or delivered in the definitive setting. Led by principal investigator Matthew Witek, MD, associate professor of Radiation Oncology at the University of Maryland School of Medicine and medical director of the Maryland Proton Treatment Center (MPTC), the trial is actively enrolling at five University of Maryland radiation therapy sites, including UMMC and MPTC.

For more information about transoral robotic surgery at UMGCCC to assist patients with CUP and to see a video of Hatten describing his approach, visit UM Physician Briefs.