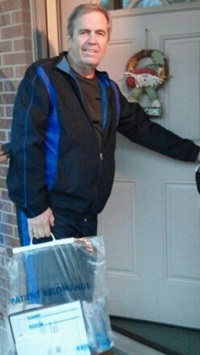 Tim Koelble wasn’t sold on receiving a lung transplant, even though it was apparent it was his only option if he wanted to extend his life.

Active his whole life, Koelble didn’t have energy to do just about anything anymore. It didn’t matter where he was, whether he was sitting or lying down, he could fall asleep at a moment’s notice. But the fear of dying on the operating table  and the unknown of what his life could be like post-surgery was enough to keep him from pursuing a life-saving operation.

“Finally I got to the point where I looked at my wife and I said ‘it’s time to go,’” Koelble said. “I was tired of feeling like I did.”

Soon after, Koelble attended a lung transplant support group meeting at the University of Maryland Medical Center. Hearing all of the stories – the patients who waited a short time for the transplant, those who waited years, and the positive results of those surgeries – made something click

“That changed my entire perspective,” said Koelble, who received a double-lung transplant in October 2016.

While in high school, there were two “firsts” that were going have long-term effects. Koelble started to follow his father in the newspaper business and had his first byline story when he was 16 years old, in Dover, Ohio. He continues in the trade as a sports reporter for Herald-Mail Media in Hagerstown, Md. But his late teenage years also came his first encounter with smoking.

He tried to kick the habit a couple of times – once hypnosis kept him off cigarettes for six months – but he always found his way back to the pack.

Koelble developed chronic obstructive pulmonary disease (COPD) over the years. Then, in April 2011, his lungs really started to deteriorate. He had a two-week bout in the hospital with pneumonia. It took two additional trips to the hospital before things worsened. After the third trip and understanding the dire necessity, he quit smoking, cold turkey.

“I knew I had to do it. It was a matter of life and death,” said Koelble, who lives in Hagerstown, Md. “Any other time it would be for my well-being. This was life and death.”

Over the next two years, his health slowly went into decline until the day he looked at his wife, ready to change. 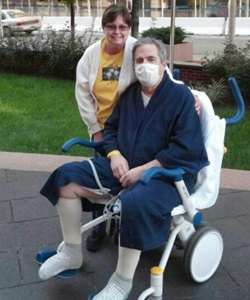 Koelble’s local pulmonologist referred him to the University of Maryland, where he went through a series of tests to determine if he was a candidate for the lung transplant, which he was.

But Koelble wasn’t sold on going through with the operation until he visited the support group.

“I finally thought to myself: ‘if these people can get through this, you can too,’” Koelble said.

Drs. Si Pham and Zachary Kon performed the transplantation without complication. And Koelble, who used up to six liters of oxygen daily pre-surgery, came out of the operation without requiring oxygen.

Four days after the transplant, a nurse took Koelble outside for the first time with his new lungs.

“I felt like I was in seventh heaven,” Koelble said. “I could breathe fresh air again. I knew then I was going to be able to do the things I could always do years ago.”