Kidney Donor and Recipient Meet for the First Time 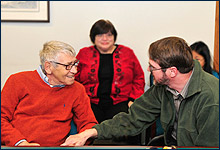 Kidney recipient David Feldman (left) meets his donor, Court Blatchford, for the first time at a meeting held at the Medical Center.

An Annapolis man who recently received a new kidney met his donor for the first time exactly a month after the transplant. The meeting took place at the University of Maryland Medical Center.

"I'm very glad I did it. What a great opportunity," Blatchford said. "It's like a dream come true. Mr. Feldman is the whole reason I did this. It's wonderful, he's a terrific guy. I know I've done something big, but it was something I really wanted to do."

Feldman, who had been on dialysis for more than five years, was working with the transplant team at the University of Maryland Medical Center to find a kidney donor. Feldman's wife, Frances, who had hoped to donate to her husband, was not a match, but it turns out Blatchford was. They were then asked to participate in UMMC's Paired Kidney Program, which allowed Feldman to find a match. Frances is now part of a chain, and her kidney will go to someone else when they find someone compatible.

Kidney exchanges, or swaps as they are sometimes called, allow living donors and their intended recipients to proceed with surgery, even if their blood and tissue types don't match. They are paired with other donors and recipients who are incompatible with each other but are a match with others in the group.

During the emotional meeting with Blatchford and his family, while the transplant team looked on, Feldman tearfully expressed his gratitude towards his donor. "It's the most selfless act I've ever seen. I hadn't believed it was going to happen, still can't quite believe it."

Blatchford's daughter Lian was also inspired by her father's good deed. "I think it's great. It inspires a lot of people. My aunts and uncles became bone marrow donors because of what my dad did. It inspires me. I may donate someday."

Blatchford's kidney was removed at Johns Hopkins Hospital and was sent to the University of Maryland Medical Center, where doctors performed the transplant for Feldman.