Chronic obstructive pulmonary disease (COPD) is an irreversible blockage of the airways, usually but not always caused by smoking.

Other causes of COPD could be inadequately treated asthma, frequent exposure to particles in the air or second hand smoke.

At the University of Maryland Medical Center, we use the most advanced COPD treatments, taking into account other diseases that may present as a side effect of COPD.

Because COPD directly affects the amount of oxygen entering the body and its organs, COPD patients commonly develop other diseases including:

With a vast team of caretakers throughout the hospital, the University of Maryland Medical Center can treat whatever comorbidities you may develop.

COPD is primarily treated with prescribed inhalers. As COPD worsens, treatment becomes more aggressive, including the use of oxygen tanks and ventilators. In some cases, lung transplantation is the best option.

Smoking cessation is also an important step to smokers who have COPD.

Read more about the study in this news release. 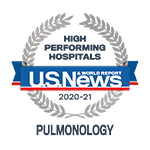