A 38 yo AAF prisoner was seen in the infirmary for a nonproductive cough. She had a history of a URI 2 months previously. Her symptoms associated with the URI had resolved except for the cough. She felt slightly feverish intermittently but her temperature was never documented. She noticed very mild fatigue and DOE that she had attributed to the URI. She was treated with a course of azithromycin without much improvement. A PPD was placed and was interpreted as negative. Because her cough persisted and she had lost 8 pounds she was referred for evaluation. Additional history revealed that her SOB and fatigue probably predated the URI, but was otherwise unremarkable. Physical exam revealed T 100.3, R 28, P 94, BP 150/96; HEENT unremarkable; Lungs with scant bibasilar rales; CV with RRR, nl S1S2, +S4, without murmurs; Extremities without clubbing, cyanosis, or edema. Laboratory data: Hct 41.2, LDH 943; ABG- 7.48/32/58; PFTs: FVC 2.62 L (71% predicted); FEV1 2.23 L (72% predicted); TLC 3.96 L (76% predicted); and DLCO 16.2 ml/min/mmHg (57% predicted). 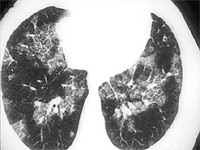 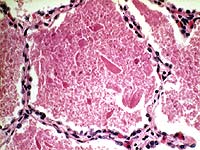 A 50 yo male was receiving home IV antibiotics for osteomyelitis of his hip. He was 7 weeks into his course of therapy when he began to develop low grade fevers. Over the next 2 weeks extensive work-up was done without revealing a source for the fever. The orthopedics service felt his osteomyelitis was responding to the therapy and that this was unlikely a source for his elevated temperature. About this time he began to experience dyspnea, which progressively worsened so he was admitted to the hospital for evaluation. Physical exam revealed T 100.8, R 16, P 82, BP 130/74; Right subclavian tunneled catheter; Lungs with scant bibasilar rales; CV with regular rhythm and no murmur; Extremities without cyanosis, clubbing, or edema. PFTs: FVC 3.98 L (83% predicted); FEV1 3.08 L (80% predicted); TLC 5.74 L (85% predicted); and DLCO 14.96 ml/min/mmHg (42% predicted). 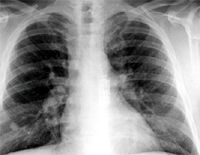 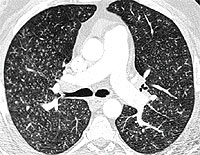 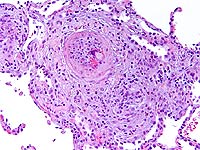 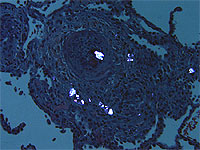 A 51 year-old male with a history of intravenous drug use was admitted with presumed sepsis. He had fever and malaise for two weeks prior to admission. The patient was alert and oriented and his physical examination was unrevealing. BP 78/35; HR: 140; RR 32; and Temperature of 104.3. The patient received piperacillin-tazobactam, gentamicin, and vancomycin pending culture results. A CXR taken on admission showed complete absence of pulmonary edema. About six hours later, the patient developed acute respiratory failure requiring intubation. A CXR taken to assess ET (endotracheal tube) positioning showed very asymmetric infiltrates affecting the right lung field. A TTE (transthoracic echocardiogram) performed a few hours after intubation revealed severe acute mitral regurgitation with anterior leaflet tear. 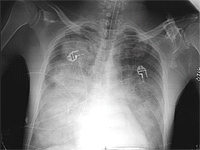 An 80 yr white female presents with four years of dyspnea on exertion, several months of dry cough with one episode of hemoptysis, and unintentional 20 lb weight loss over the past 2 years. She is a nonsmoker. She denied having night sweats, fever, or chills. Her PPD has always been negative, and she worked in an office her entire life. Her physical exam was unremarkable without peripheral adenopathy and clear lungs. Representative chest CT slices are shown: 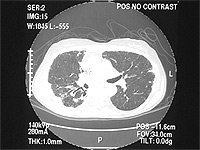 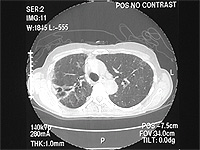 MAI infection. The term "Lady Windermere Syndrome" was first used to describe the infection in elderly women by Reich, et al in 1992. They reported a series of 6 elderly white females with previously healthy lungs who developed MAC lung disease limited to the right middle lobe and lingula. It's unclear what predisposes these patients to infection, but one theory is that voluntary cough suppression in these "prim and proper" ladies leads to poor mucus clearance and increased chance of infection in the already dependent RML and lingula.

A 42 year-old white male, with ALL, 8 months post-allogeneic unrelated donor BMT with a past history of Graft versus host disease, was admitted with dyspnea and cough with clear color sputum. Ten days prior to current admission he was treated for right middle lobe infiltrate with change of voriconazole from prophylactic to full treatment dose, with the addition of gatifloxacin, and continuation of famciclovir and bactrim at prophylactic doses. 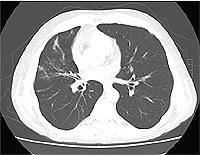 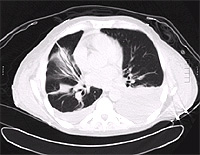 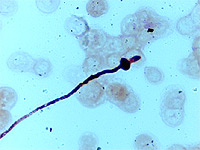 Scedosporium was first identified as a human pathogen in 1984. About 10% of patients with cystic fibrosis are colonized with this organism. It can be isolated from soil and fresh water. Disseminated infections can occur in immunocompromised with risk factors: leukemia, bone marrow and solid organ transplants, and states of impaired cellular immunity. In most case reports high dose steroids, tacrolimus, or cyclosporine were implicated. Clinical manifestations resemble Aspergillosis. 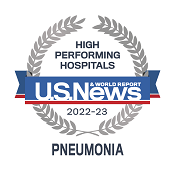