When Barrett's esophagus has a significant presence of precancerous cells — known as high-grade dysplasia – it carries a major risk of becoming esophageal cancer.

Destroying those abnormal cells using an endoscope (a flexible lighted tube and camera) and liquid nitrogen has become the standard of care for preventing cancer in Barrett’s esophagus patients. Cryotherapy — freezing tissue with a liquid nitrogen spray at -196º C — offers a solution with few side effects.

While cryotherapy was previously shown to be safe and effective, a study by the University of Maryland Medical Center, long a leader in cryotherapy, confirms its long-term success in preventing cancer.

The 2017 study by Bruce D. Greenwald, MD, professor of medicine at the UM’s School of Medicine, and Fariha Ramay, MD, MBA, a gastroenterology fellow, found cryotherapy can remove precancerous cells with low risk that it will progress to cancer.

Although the abnormal cells returned in some cases, they were successfully treated and most patients remained free of high-grade dysplasia at five years, according to the study published in Gastrointestinal Endoscopy. Patients were followed for three and five years. 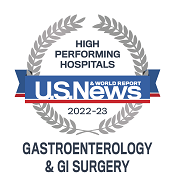