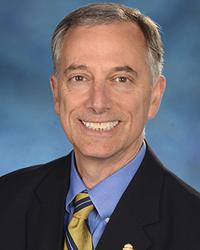 After serving as a chief medical resident for one year, he joined the faculty of the University of Maryland School of Medicine in 1993. He was promoted to Professor of Medicine in 2009.

He is also a member of the Marlene and Stewart Greenebaum Cancer Center at the University of Maryland Medical Center. He is an active member of the Thoracic Oncology Group, which utilizes a multidisciplinary approach involving surgeons, medical and radiation oncologists, gastroenterologists and allied health care staff for the comprehensive management of esophageal cancer.

Dr. Greenwald’s clinical and research interests involve the esophagus, the tube that connects the mouth to the stomach. He specializes in cancer and pre-cancerous conditions of the esophagus, including esophageal cancer, Barrett’s esophagus and esophageal squamous dysplasia. He also treats conditions such as Crohn's disease, gastrointestinal cancer, GERD (gastroesophageal reflux disease) and swallowing disorders.

He was featured in Maryland Public Television's Your Health series where he discussed esophageal cancer.