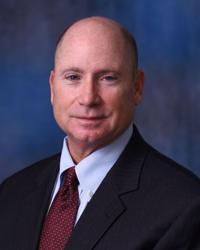 Dr. Benjamin is a nationally recognized leader in the surgical treatment of renal artery disease, with an emphasis on renal artery aneurysm and all fields of endovascular interventions. He is the chair of surgery at UM Baltimore Washington Medical Center (UM BWMC).

After completing his vascular surgery training at Wake Forest University, he came to University of Maryland Medical Center (UMMC) as assistant professor of surgery and has been with the Medical System ever since. At UMMC, he pioneered the aortic endograft procedure, a less invasive method of abdominal aortic aneurysm repair.

Dr. Benjamin, who became the chief of vascular surgery and Department of Surgery at UM BWMC in 2002, is committed to bringing the experience and expertise of academic medicine practitioners to his community.

"We have a tight connection with the Medical Center," he says. "Some patients are better served at the community hospital in their own backyard. Others are better served at UMMC. And when that is the case, we will send them there. We will make sure they get to the best place to receive their care."

The son of an electrician and a stay-at-home mother, Dr. Benjamin did not originally plan on a career in medicine. But when he worked as a hospital blood draw technician during college, a cardiac surgeon offered him the opportunity to watch a heart surgery. And that changed everything.

"The ability to instantly help someone with surgery was fascinating," he says. "And I liked the technical aspect because I'm good at working with my hands."

A lifelong boater and fisherman, Dr. Benjamin uses those hands to attempt to master the art of fly fishing.

Dr. Benjamin is a registered vascular technologist and a clinical associate professor of surgery at the University of Maryland School of Medicine. He is active in the Eastern Vascular Society and previously served as its president.