Partners on a Mission to Keep Kids Safe

Their video won the local competition, then the top prize from Safe Kids Worldwide, earning them a professional team re-shoot and mix. The result won accolades and exposure sponsored by FedEx, as well as a 2015 Telly Award, the film-video production equivalent of the Emmy Awards. 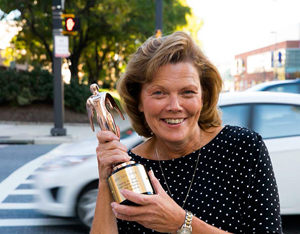 "When they called to say Patterson Park had won the top prize, I said, 'You've got to be kidding me.' It was so exciting," Hardingham said. "We went back to the school with a team from the national office to beef it up with a professional crew to create a real media-worthy music video. We were able to add other messages we wanted to hit on. The students were charged with making the needed edits. For those highly creative kids – it was no big effort for them."

Then, at the Safe Kids Worldwide "PREVCON" conference this summer, the video netted an award for Safe Kids Baltimore for "Excellence in US Programs – Pedestrian Safety." The video is now being promoted by FedEx (corporate pedestrian safety partner for Safe Kids), the National Highway Safety Administration, and the National Safe Routes to School Program.

Safe Kids Baltimore is one of 400 local coalitions of Safe Kids Worldwide. The coalition includes members from throughout the UMMC community, representatives from the Maryland Poison Center, MD Kids in Safety Seats, the Baltimore City Fire Department (BCFD) and other health and safety organizations.

"In our target area, Baltimore City, we focus on programs that are geared to what our data shows us – we focus on fire prevention, child passenger safety (car seats and buckling up), pedestrian safety, and infant safe sleep," Hardingham said.

The sheer joy of the video – as well as its important message – is a high point in Hardingham's career, which started out in pediatric intensive care and evolved into a role intended to keep children out of harm's way to begin with.

She became a pediatric outreach coordinator for the UM Children's Hospital and developed the Safe Kids Baltimore coalition in the 1990s. The focus quickly became the prevention of unintentional childhood injuries – the leading cause of death for children between the ages of 1 and 14. Safe Kids Baltimore's mission is to prevent childhood injuries and related deaths in Baltimore City.

Safe Kids Baltimore's ongoing programs include monthly safety seat checks, where Safe Kids-certified technicians partner with the fire department to educate parents on proper use and installation of car seats. During the last fiscal year, the coalition checked 113 child safety seats at the seat checks. There was an overall misuse rate of 83 percent. Also, the program arranged to provide 31 car seats to families who could not afford to buy them.

For infant patients with disorders that make a traditional car seat impossible to use, Hardingham performs clinical evaluations to measure how well the babies maintain their airway in their specialty seats.

Another impact has been in fire safety. Some 30,000 city children in primary grades have attended a fire-prevention program conducted by Safe Kids in partnership with the BCFD.

"They love it," she said. "By the end, they're jumping up and down screaming about smoke detectors and 'getting out and staying out!'" Hardingham said.

The number of child fire-related injuries and deaths has decreased over the past 10 years in Baltimore, although the city still has a higher-than average fire-related fatality rate overall compared to other US cities, Hardingham said.

For the nurse who once envisioned a career solely inside the PICU, working hands-on to treat the sickest young people, her current role has been just as rewarding.

"Sometimes it's the simple things, like when you're doing a school program, getting ready to leave, and the kids are so thankful and eager to tell you something they learned," she said. "When families come in to a safety seat check needing a car seat or they have one that isn't quite installed correctly, and to spend 45 minutes with them, educating them, and afterwards they leave knowing their child is as safe as possible in their family car. Knowing it was maybe one event, one change, or one prevention message that helps save the life of a child."

Visit the Safe Kids Baltimore website. To volunteer, send an email to khardingham@umm.edu.