Safe Kids Baltimore, in partnership with the Baltimore City Fire Department, conducts a school based fire prevention program for first through third grades in the Baltimore City Elementary Schools. Each year about 60-70 schools are invited to schedule the program at their school.

(We rotate the schools every other year in hopes of reaching every child by the end of third grade.)

The schools receive a mailing about the program in September and then again in November and January if they do not respond to the previous mailings. To find out if your child's school is on our list for this school year email us at safekidsbaltimore@umm.edu or call us at 410-328-7532.

The program includes a highly interactive presentation which includes a visit from their local firefighters. The students also receive a home fire safety checklist to complete. If they return their form, they receive afire hat and a bag of fire safety incentive items. The forms are reviewed, and if the home is in need of smoke alarms, arrangements are made for them to be installed by the BCFD for free.

Safe Kids Baltimore and the Baltimore City Fire Department have also worked together on fire prevention grants to decrease fire related injuries and deaths in areas where a number of children were injured or killed. This most recently includes the 21223 area.

A Fire Video In the Making 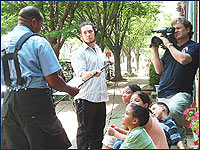 One of the most important goals of Safe Kids Baltimore is to make sure no child dies in a fire. That's why we have created a video about fire safety.

Here is a behind the scenes look at the making of this video. On a June day, we turned a rowhouse in South Baltimore into a movie set. Jada, Gabbie, Brian and Kevin were the child stars who came out to help us spread the word about fire safety. Our "Inspector Detector" Kevin Williams of the Baltimore City Fire Department reminded the children of key fire safety issues, like having a fire escape plan and having a working smoke alarm on every floor. He also stressed the importance of "Get Out and Stay Out" when there is a fire.

This video will be given to Baltimore City elementary schools and select head-start programs in the city. 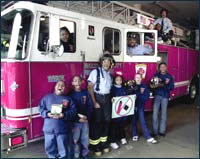 Safe Kids Baltimore and the Baltimore City Fire Department have also worked together on fire prevention media campaigns include the production of Fire Safety Rap PSA which was shown on several local stations.

The Oldtown Fire Station in downtown Baltimore became a music video set for the video. Seven children and several firefighters performed starring roles in the video.

The rap video addresses the danger of tampering with matches and getting out of a house when the smoke alarm beeps. The goal is to help save lives by educating the public, and children in particular, about fire prevention and what to do in case of a fire.