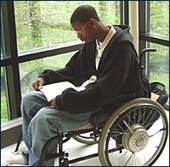 On a warm spring afternoon in May, Peggy Henderson was getting ready to close the deal on the purchase of a new car when she received a phone call from her sister in Baltimore. Peggy had agreed to allow her son to move from Georgia to live with her sister so he could attend school with his cousins. Her sister was calling to tell Peggy "Tipper" had been shot.

William "Tipper" Thomas, a football player at Randallstown High School, moved back to Baltimore to live with his cousins and finish high school. The prom was 7 days away and he, like many seniors, was looking forward to the celebration of another milestone. While waiting for a ride outside the high school gym, a charity basketball game was letting out. As the students exited into the parking lot a black BMW drove through the crowd randomly firing bullets. A young girl fell while trying to run and as Tipper reached to help her up, his life was changed forever. He was shot in the neck and chest and unable to stand up. When the ground medics arrived, they knew that Tipper needed to go to Shock Trauma and requested a Maryland State Police helicopter.

As the helicopter landed on the hospital roof, Tipper began to take a turn for the worse. Upon arrival into the Trauma Resuscitation Unit, his breathing became shallow and blood pressure dropped. A focused assessment with sonography revealed a tremendous amount of blood in his chest. A CAT scan showed the bullet that pierced Tipper's chest exploded through his lungs and blasted away the upper right lobe. The physicians quickly placed two chest tubes to remove the blood and reinflate Tipper's lung and take him for emergent surgery.

As the doctor's cut open his chest to extract the bullet, they were astounded by the liter and a half of blood that was in his chest and the other liter after the liter and a half that drained from the chest tubes. Three liters of blood is more than half of Tipper's circulating blood volume. The doctors gave him 10 units of blood in addition to 750cc's of Tipper's own blood which was transfused by a process called cell saver. They also had to remove 40% of his right lung as a result of the damage from the bullet.

After a 19-day stay at Shock Trauma, Tipper was discharged to a rehabilitation center, where he regained his upper-body strength and learned how to function as a paraplegic. He went on to attend college with a concentration in engineering.