The University of Maryland Medical Center Comprehensive Stroke Center provides many acute therapies for seriously ill patients. In 2020, the CSC treated 653 seriously ill stroke patients in 2020 (405 patients with an ischemic stroke (non-bleeding stroke) and 245 with a hemorrhagic stroke (stroke caused by a brain bleed). Here you will find some important information about stroke outcomes.

IV Alteplase is a clot busing medication provided to stroke patients. One of the complications for IV Alteplase is bleeding into the brain, often referred to as a symptomatic hemorrhage.

The symptomatic hemorrhage rate after receiving IV Alteplase should be less than 6.4%. This rate is reported in the hallmark IV Alteplase to treat stroke trials. At UMMC the rate of hemorrhage after IV alteplase administration was 2.9% (1/35 January-December 2020).

Sometimes a large clot in one of the blood vessels in the brain may cause a stroke. Sometimes a stroke patient may have a procedure called a mechanical thrombectomy to remove the clot. The procedure is performed by a specialty trained doctor called an Interventional Neuroradiologst. The procedure involves placing a thin catheter into the brain to remove the clot. Serious complications from this procedure may include having a new stroke, bleeding into the brain or damaging a blood vessel.

In 2020, the post mechanical thrombectomy bleeding rate was 1.4% % (n=2/135) compared to the reported hemorrhage rate in reported studies which is 7% (Defuse Trial, Albers et al.).* Thus at UMMC only 2 patients experienced this complication.

A good outcome for stroke patients who have a mechanical thrombectomy procedure is a TICI grade of 2b or 3. The TICI stands for thrombolysis in cerebral infarction. The TICI grade is used to describe how well the blood flows in the treated blood vessel after having a mechanical thrombectomy procedure. At UMMC , in 2020, 60.8% (87/143) of the TICI scores were 2b-3 compared to the national accepted rate of 76% reported in clinical trials. *

At UMMC we have specialists called vascular surgeons who perform a procedure for patients who have disease in the carotid arteries. Nationally, the anticipated serious complication rate after this procedure is < 4%. Serious complications include having a stroke or death. At UMMC, in 2020, no one died or had a stroke (46 patients). 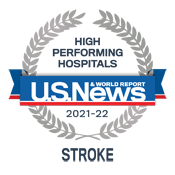 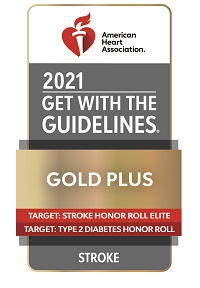