Having occasional liquid or gas reflux is considered normal. When it happens frequently, particularly when not trying to belch, and causes other symptoms, it is considered a medical problem or disease and can increase your chances of developing esophageal cancer.

The stomach produces acid and enzymes to digest food. When this mixture refluxes into the esophagus more frequently than normal, or for a longer period of time than normal, it may produce symptoms. These symptoms, often called acid reflux, are usually described by people as heartburn, indigestion, or "gas." The symptoms typically consist of a burning sensation below and behind the lower part of the breastbone or sternum.

People who have GERD symptoms frequently should consult a physician. Other diseases can have similar symptoms, and prescription medications in combination with other measures might be needed to reduce reflux. GERD that is untreated over a long period of time can lead to complications, such as an ulcer in the esophagus that could cause bleeding. Another common complication is scar tissue that blocks the movement of swallowed food and drink through the esophagus; this condition is called stricture. Barrett's esophagus, a condition in which the normal esophageal lining is replaced by a new lining, is another complication of GERD.

Esophageal reflux may also cause certain less common symptoms, such as hoarseness or chronic cough, and sometimes provokes conditions such as asthma. While most patients find that lifestyle modifications and acid-blocking drugs relieve their symptoms, doctors occasionally recommend surgery. Overall, more than 60 million American adults experience GERD, making it one of the most common medical conditions.

The exact causes of Barrett's esophagus are not known, but it is thought to be caused in part by the same factors that cause GERD. Although people who do not have heartburn can have Barrett's esophagus, it is found about three to five times more often in people with this condition.

Research has identified a number of risk factors associated with Barrett's esophagus: 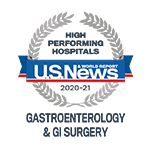