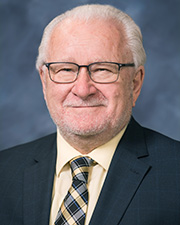 Falcone recently retired after nine years as executive director of the Heron Point Retirement Community in Chestertown. He had previously served as vice chair of the Maryland Health Care Commission and was a member of the MHCC's Rural Health Group. Falcone also formerly served as board chair for the Lifespan Senior Network, which is the largest senior care provider association in the Mid-Atlantic and represents more than 250 senior care provider organizations in Maryland, and was honored with the Lifespan Senior Network's Chairman's Award. His previous board memberships include the Hudson Valley Lung Association and Catholic Home Health Services in New York. A veteran of the U.S. Army, Falcone served in Korea and Vietnam.

Prior to assuming the leadership of Heron Point, Falcone spent 10 years with Erickson Retirement Communities, including his final position as executive director of Charlestown, a 2,000-unit facility in Catonsville, Maryland. Falcone and his wife, Patricia, moved from Eldersburg, Maryland to Chestertown in 2012 and fell in love with Kent County and the Eastern Shore lifestyle.

Of his appointment to the UM SRH Board, Falcone said, "I'm very excited about the new upcoming changes to our hospital in Chestertown and feel honored to be chosen to be on the Board."

A resident of Chester, Maryland, Dr. Parry is well known to the Kent and northern Queen Anne's County communities, having maintained a urology practice in Chestertown for nearly a decade. He joined University of Maryland Shore Medical Group – Urology in 2012 after three decades in urology practice in the Tampa Bay area of Florida.

In a volunteer capacity, Dr. Parry has served as an examiner and board member for the American Board of Osteopathic Surgeons, as a trauma and leadership instructor for the Uniformed Services University of Health Sciences, and in the Maryland Defense Force as a commanding officer of the Physicians Regiment, 10th Medical Regiment.

"Health care is changing globally, and many small, rural hospitals in the United States are closing," said Dr. Parry. "I'm impressed and excited that the University of Maryland Medical System and Shore Regional Health have made a major commitment to maintaining our Chestertown hospital in a new model that will meet the particular health care needs of our community. We are going to make health care work better for everyone in Kent and northern Queen Anne's counties."