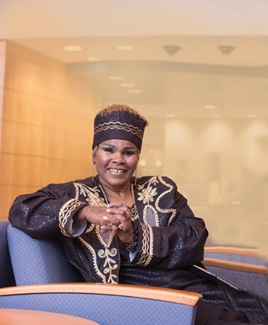 Margaret Little, a 55-year-old native from the Sandtown neighborhood of Baltimore, is a very spiritual and lively woman. What many would not know about this vibrant woman is that she has been dealing with open wounds on her legs for almost 13 years. After receiving treatment at other hospitals with no success, Little became frustrated and started to care for her wounds on her own. “No matter what they tried, the skin never came back,” she says.

Little became a patient at the Wound Healing Center at UMMC Midtown Campus. After seeing Little’s widespread wounds on both legs, experts quickly surmised they were caused by venous stasis, a condition, usually of the lower extremities, having inadequate venous blood flow, which causes the skin to break down, leading to open sores.

The first line of treatment was to get her venous stasis under control with compression stockings. These special elastic stockings apply pressure at the ankle and lower leg and improve venous blood flow and reduce leg swelling. Then, the wound could be treated by a process of debridement, a thorough cleaning of all injured and dead tissue.

Just 13 weeks after Little’s first visit to UMMC Midtown Campus, one of two wounds on her left leg had completely healed, and her right leg and the second wound on her left leg were well on their way to healing.

“When I saw that skin had finally covered my legs, I started dancing,” Little says. “It was a celebration of life. I have had my legs covered for so long. I have wanted to wear skirts for so long and now it was finally possible.”

Baltimore resident Horace Baker noticed an ulcer on his right foot. “I’m on my feet a lot for work, but I wasn’t wearing the right shoes,” he says. For someone, like Horace, who has diabetes, poorly fitting shoes can increase the risk of diabetic foot ulcers. Weeks passed and the ulcer worsened.

At the emergency department at UMMC Midtown Campus, podiatric surgeon, Jacob Wynes, DPM, diagnosed Baker with Charcot arthropathy, also known as Charcot foot. Charcot foot forms in patients with peripheral neuropathy, a common complication of diabetes where the nerves in the lower legs and feet are damaged, causing loss of sensation in the feet. Bones in the foot and ankle are weakened causing deformity in the foot, which can lead to non-healing wounds and Baker’s biggest fear, amputation.

“I was afraid that I would lose my foot,” Baker says. “But Dr. Wynes assured me that he would do everything to save it.”

Baker received treatment at the Wound Healing Center at UMMC Midtown Campus where he underwent hyperbaric oxygen therapy to assist with the healing of his ulcer, and surgery to reconstruct the bones in his foot. After one year and six months, the healing process was complete.

“It was a long process but Drs. Wynes and Abawi were with me at every step. If there were complications, I could call immediately my treatment was adjusted to address them. I’m finally doing well, and that’s all thanks to the expertise of the Wound Healing Center. Without them, I wouldn’t have healed,” says Baker. 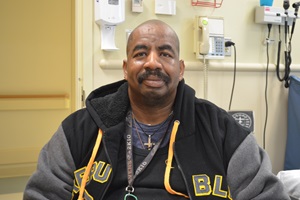 Back On His Feet

For Densely Sayers, a Baltimore city resident and local restaurant chef, 13 years of pain began with a simple scratch. The wound, caused by Sayers’ own fingernail, seemed small at the time, he says. But months later when it had not healed and began spreading, he knew something was wrong. “It went from my knee, all the way down to my ankle,” Sayers says.

Each year, despite countless efforts to treat his wound at home, it grew larger, the pain continued to escalate, and he was taking numerous pain relievers each day. Sayers, 45, could barely walk, choosing to move around on his knees instead of his feet to get by with less pain.

When Sayers arrived at the Wound Healing Center, the wound on his left leg had severely deteriorated. He met with Zacharias Mavrophilipos, MD, a general surgeon at the Wound Healing Center, who evaluated and diagnosed his condition as venous ulcers. Venous ulcers occur when leg veins don’t properly return blood back to the heart. Usually, they form on the sides of the lower leg, above the ankles and below the calf. They are caused by poor blood circulation in the legs and, if left untreated, can lead to infection or even blood poisoning.

“By removing the damaged tissue from his leg and implementing compression therapy, we were able to get Mr. Sayers literally back on his feet again,” Dr. Mavrophilipos says. Within six months, Sayers had returned to the kitchen, cooking for a local catering company. He now walks, and even runs, without pain. “I’m thankful every day for the care I received at the Wound Healing Center,” he says.