Pediatric Critical Care experts save his life with coordinated care

Isaiah Cannon was a regular teenage boy from Edgewood, Maryland, active and playful with his friends. An innocent scab on the 14-year-old's knee became a nightmarish ordeal when MRSA, an aggressive staph infection, took control of his body and landed him in the Pediatric Intensive Care Unit (PICU) at the University of Maryland Children's Hospital (UMCH) for 59 days.

Isaiah Cannon scraped his knee in a forgettable interaction with friends playing football – nothing uncommon for active boys. The wound healed normally and was forgotten about. Weeks later he started showing flu-like symptoms – fever, achiness. Two trips to an urgent care clinic sent him home with the same diagnosis – he had the flu and needed to treat the symptoms. After about a week of no improvement, his big brother John Cannon Jr., an EMT/Firefighter for Baltimore and Harford Counties, stopped by the house. He took one look at Isaiah and said, "I'm calling an ambulance for you. You're going to the hospital." 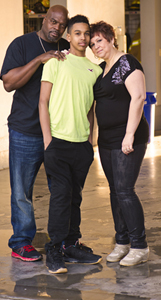 Once at University of Maryland Upper Chesapeake Medical Center, Dr. Tim Chizmar was quick to realize this was very serious and took the appropriate actions to stabilize him for transfer. Isaiah was intubated and began receiving antibiotics. He was flown by helicopter to the University of Maryland Children's Hospital immediately as his condition began to rapidly decline. Reality quickly sunk in with parents John Sr. and Marcy Cannon that this was more than the flu.

Isaiah made it to UMCH but went into cardiac arrest within the first hour. His parents watched in horror as nurses and doctors crowded around their son and began administering CPR to bring him back to life. "I can still see the nurses on top of my son, doing CPR," Marcy remembered. "Next thing I know, the doctors are telling me that they have to put him on heart/lung bypass, the ECMO machine. Then came the dialysis for his kidneys. Within what seemed like minutes, he was on a ventilator, ECMO and dialysis. The only thing working was his brain. All his other organs had shut down."

"Isaiah was extremely touch-and-go during those first few days," said Dr. Adnan Bhutta, head of Pediatric Critical Care. "We told Marcy and Johnny to prepare themselves; this was going to be a marathon, not a sprint."

The MRSA bacteria had seeped into his blood, bones and organs, causing multi-system organ failure. Multiple pediatric critical care specialists were working on him around the clock to manage his organ function. Isaiah was on ECMO, a type of heart/lung bypass machine available only at the most sophisticated medical centers, for eight days to allow his lungs to heal and breathe for him again. He was on the ventilator for a week and a half after coming off ECMO, and on dialysis to support his kidneys for one month. Isaiah's core medical team included eight pediatric critical care physicians, a pediatric heart surgeon, and a pediatric nephrologist, in addition to dedicated nurses who stayed by his bedside around the clock and other physicians who consulted as needed.

During this time of careful monitoring, a CT scan revealed an aneurysm on Isaiah's aorta, so doctors placed a stent to prevent a rupture. The MRSA infection was finally under control, but poor circulation from his ailing heart turned his toes black. Doctors were able to salvage one leg, but the other was amputated below the knee.

"We thought he was going to lose both legs, but thank God they were able to save the left leg," said Marcy.

"Isaiah's case was an extremely complex one that required expertise from all the UMCH doctors and nurses," said Bhutta. "But this is what we excel at – treating patients whom other hospitals can’t handle and working as a coordinated team to manage every aspect of these sick kids' care. We treat them as if they were our own."

After 59 days in the PICU, Isaiah was transferred to the University of Maryland Rehabilitation and Orthopaedic Institute to continue his recovery and regain daily life skills. There, he mastered his wheelchair and learned to walk with a walker.

After four months at home, Isaiah was fitted with a permanent prosthesis for his right leg, and Marcy said "nothing seems to stop him now."