As most birth announcements show, most babies are weighed in pounds. However, Kayleigh Klatt was so small at birth that she had to be weighed in grams. She was 330 grams, to be exact, making her the smallest baby to ever survive and be discharged in Maryland. Being so small at birth comes with a laundry list of complications, and within her first few months of life, Kayleigh and her family were unsure if she would ever make it home.

Before Kayleigh was born, her mother Nicole Bent's life was pretty close to her ideal: she ran a successful day care, traveled out of the country frequently and enjoyed life to the fullest. But she and her husband, Jake Klatt, were still missing one thing in their lives: a child.

After more than a year of planning, they found out they were expecting a baby girl.

When Nicole went in for her regular check-up at Mercy Medical Center at the end of December, 2013, doctors discovered that the placenta was clogged, meaning the fetus was not getting enough oxygen or nutrients. Nicole also had preeclampsia and was at risk for a stroke. She would have to deliver the baby soon or risk death for the both of them. 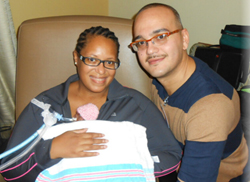 Doctors said the magic number was 500. If Kayleigh made it to 500 grams in the womb, she would be large enough to have an intubation tube and would have a fighting chance of survival.

When Kayleigh was born a few days later in January, 2014 at 330 grams and three-and-a-half months premature, no one believed she'd make it.

Shortly after her birth, she was intubated and stayed at Mercy's NICU for several months, but her condition worsened.

In May, Kayleigh was transferred to UMCH's Pediatric Intensive Care Unit (PICU) for immediate specialty care. She arrived at UMCH in cardiac arrest, and the PICU team went to work as soon as she arrived.

"Despite the prognosis, we saw an immediate improvement as soon as we arrived at UMCH," Nicole said. 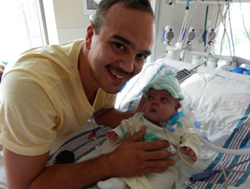 While there was an initial improvement, Kayleigh was not totally in the clear. During her four-month-long stay at the PICU, Kayleigh experienced chronic lung disease, heart problems, faced infections and seizures, and underwent four surgeries.

"Her long term prognosis was bad. Liver and kidney problems, gall bladder issues, [and] cerebral palsy were all a potential," Nicole said.

Nicole stayed by Kayleigh's side around-the-clock. Jake was persistent and kept everyone's spirits up. He knew that Kayleigh's tenacious spirit, along with the expert care at UMCH, would keep her alive. He came to the hospital every day after work to spend time with Kayleigh and to make sure that both he and Nicole understood her diagnosis and care.

Kayleigh was transferred to Mt. Washington Pediatric Hospital (MWPH) for follow-up treatment where Nicole learned important skills for managing Kayleigh's care at home. Slowly, but surely, Kayleigh's health improved, and nearly a year after her birth, she was cleared to go home. 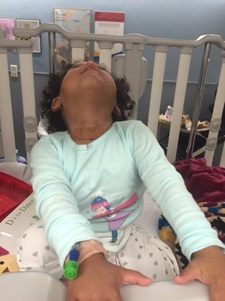 Today, Kayleigh has developed an amazing spirit and is extremely social. Despite her uncertain beginning, she's thriving. Nicole and Jake are thankful for the PICU team at UMCH that saved their daughter's life.

"From the doctors who advocated for Kayleigh's surgeries to the social workers who managed our case, we believe our family was in the best possible hands," Nicole said.

Kayleigh still receives follow up care at MWPH, which includes enrollment in an intensive feeding program. She also receives all of her specialty care at UMMC. Although she is still receiving treatment, she is doing much better than anyone imagined. She is a pro at puzzles, is working on mastering shapes and colors and loves to learn and play.

In October, 2016, Kayleigh was admitted to the PICU again, this time to have her airway scoped. That same day, she was decannulated (her tracheostomy tube was removed for good) and was discharged the next day. The family is forever grateful to the PICU staff and outpatient specialist doctors, who Nicole credits for getting Kayleigh to where she is now.

"I can't believe she went from a NICU baby to being able to walk. She amazes me every day," Nicole said. 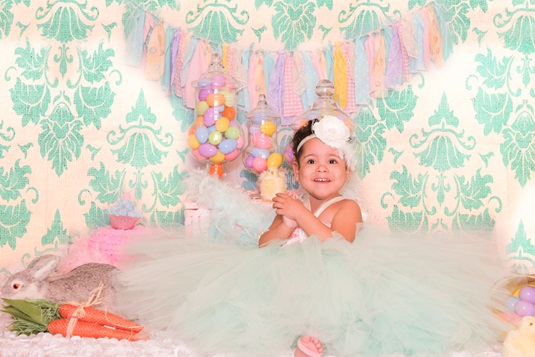