Personality Shines Through Treatment for Neuroblastoma

Six year-old Desi Brown's energy lights up the University of Maryland Children's Hospital (UMCH) Hematology/Oncology clinic. She has a hug and a smile ready for each staff member, and she bounces around picking up every toy in the play area while she waits to be seen for her follow-up appointment. At first glance, you'd never know Desi once had cancer. 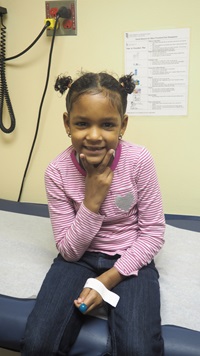 Grandparents Faye and Reginald Johnson didn't notice a difference in Desi's exuberant personality or activity levels; instead, it was a swollen stomach (her only symptom) that prompted them to bring her to the UMMC pediatric emergency department in January, 2015. Once there, Desi was diagnosed with neuroblastoma, a kind of cancerous tumor that forms on nerve tissue. Her course of treatment began immediately at UMCH.

In the year and a half that she received treatment, she had to unenroll from preschool because her immune system was so weak that she was prone to many types of infections. She underwent five rounds of chemotherapy, radiation, numerous central line insertions, stem cell therapy, biopsies, transfusions and an array of blood tests. Despite Desi's hatred of needles and inability to be around her friends at school, she kept up her spirits high through even the worst of times.

"Desi lost her hair within the first week of chemo, but that didn't stop her. She was very herself and very outgoing through all of her treatments," Faye said.

Faye and Reggie made sure Desi made it to all of her treatments and appointments on time. They stayed with her during the several times she was admitted to UMCH, including a one-month stay in a depressurized room. They filled out countless pieces of paperwork and did their best to explain to Desi what was happening to her. Any time the grandparents didn't really understand what was happening, Desi's health care team would explain all the things that both they and Desi would go through.

When Desi's tumor stopped responding to regular treatments, she was referred to a hospital in Pennsylvania for a novel treatment called MIBG therapy, a very targeted form of radiation used to treat high-risk neuroblastomas.

After five days out of state, the family headed back home. On the way back, Desi's temperature rose to 105 and they had to make a stop at University of Maryland Upper Chesapeake's ED. Once she was stabilized, UMCH sent an ambulance to Bel Air to bring her back to Baltimore, where she finished up her treatment.

Desi has been cancer free since June 2016. She attended a day camp that summer and is currently back at school, two things that used to be unthinkable while she was receiving treatment.

She is thankful for her favorite nurse, Stella, for Dr. Theresa York and everyone who continues to care for her. Faye and Reggie are also thankful for Child Life's generous and loving care for the whole family.

Praise for Desi and Family

Of Desi's journey at UMCH, Dr. York shared, "I met Desi and her grandparents when they first found out about her having neuroblastoma. I have been so honored and privileged to be part of the team that has taken care of her. Desi is truly a beacon of happiness and her battle with cancer has been very humbling. She has had to endure some of the most toxic chemotherapy, long surgery to resect her tumor, radiation treatments, stem cell transplant and immunotherapy. To see her beat all of this and be the person she is today is a miracle! I feel that she is a living miracle and I absolutely enjoy taking care of her and supporting her grandparents throughout this whole process!"

Because of the toll that cancer treatments take on patients, the pediatric hematology/oncology team stays involved with each patient for the rest of their lives. This could be in the form of regular follow-up visits, genetic counseling or enrollment in the cancer survivorship program to monitor the risks of developing other types of cancers later on in life. Desi, like each and every pediatric cancer patient, can continue to come back to UMCH as long as she wants.