A Fighting Spirit Gets Past Cancer

Preston Ritchie is a non-stop spitfire kind of kid.

He's candid about breaking bones while horsing around on vacation and speaks passionately about his interest in baseball and cooking.

Essie, his mother, never thought anything could slow him down.

One night when Preston suddenly started coughing up blood, his family rushed him to UM Baltimore Washington Medical Center for an X-ray.

There they learned he had a mass on the back of his left lung, and Essie began to fear what would happen next.

He was admitted to the University of Maryland Children's Hospital (UMCH) in May, 2016, which began a series of biopsies and then a month-long intubation period (during which time a tube was inserted down his windpipe to help him breathe).

Preston was diagnosed with IMT, a rare tumor that can form on mucousy surfaces such as the lungs and abdominal organs. IMT is more likely to occur in children under 5 and, like in Preston's case, can develop without any symptoms.

"I unfortunately watched both my parents pass from cancer, so to see my child there was one of the scariest things ever. It still scares me to this day," Essie said. 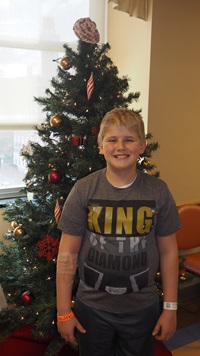 While Preston was intubated, he missed out on a lot of things that his friends and siblings were doing. He couldn't play sports or go to school. But even when he was incubated, he never stopped doing things for himself—he got up from bed, walked around the hospital and even played catch with his nurses, things that most incubated kids don't have the energy to do.

"People that didn't even know us were reaching out to us," Preston said.

Preston was discharged in June, 2016. He takes a chemotherapy medication twice a day, still comes in for monthly checkups and is scheduled to have his tumor removed soon. Although he's no longer an inpatient, his favorite nurses Emily and Suzie try and see him when he comes in, something that mom Essie is grateful for.

"The nurses and staff are absolutely amazing. They work so well with him and they are so patient. I don't think I would have made it through without some of the nurses," Essie said.

Dr. Theresa York, who manages Preston's treatment, said, "Preston Ritchie is an amazing patient. He always listened to our recommendations for modifications of his activities in the beginning of his treatment. These types of tumors can cause issues with profuse bleeding so he was not able to do several activities that he enjoyed. He also always took his medication. He is one of the best patients I have ever met. His parents are wonderful and very supportive. They never left his side! They are truly an amazing family and inspiring to me! They have overcome several obstacles and Preston has a very unique and fighting spirit that spreads to all of us who have been privileged to take care of him."

Preston is back to school, playing every sport imaginable and wouldn't have it any other way.