Esophageal cancer patients deserve more than just a good surgeon. They deserve a multidisciplinary team of specialists who provide easy access to the most advanced surgical and non-surgical care – and who will stop at nothing to restore a patient's health.

That's the team you'll find at every cancer center within the University of Maryland Cancer Network.

"At the University of Maryland Cancer Network, patients have an entire team working on their esophageal care," says Cherif Boutros, MD, associate professor of surgery at the University of Maryland School of Medicine (UMSOM), and chief of surgical oncology at UM Baltimore Washington Medical Center, where he is also medical director of the Tate Cancer Center. "The network is a pioneer in innovative cancer treatments, including minimally invasive and robotic procedures to target cancers in every part of the esophagus. And our dedicated providers are among the most experienced in the state, ensuring patients receive high-quality care at every turn."

In later-stage esophageal cancer, the cancer has spread deeper into the esophageal wall. Tri-modality therapy -- a combination of chemotherapy, radiation and surgery -- often yields the best results, Boutros says.

Many cancer patients receive chemotherapy and radiation before surgery. But some with later-stage esophageal cancer have dysphagia (trouble swallowing foods or liquids). With swallowing problems often come weight loss or vomiting.

Before these patients receive chemotherapy or radiation, UM Cancer Network gastroenterologists will use an endoscopic procedure to open the esophagus and possibly place a stent inside to keep the esophagus open. This allows patients to improve their nutrition and even gain weight before proceeding with chemotherapy and radiation therapy. Patients receive these therapies at the same time for about five to six weeks. If the cancer has not spread, the patient may then be ready for surgery.

Tri-modality therapy can sometimes "downstage" the cancer to an earlier stage, giving patients the best chance to have their cancer completely removed by surgery. When compared with surgery alone, a 2006 University of Maryland Medical Center study shows, tri-modality therapy gave patients with resectable esophageal cancer double the chance of survival and triple the chance of progression-free survival.

UM Cancer Network surgeons perform open, laparoscopic and robotic-assisted esophagectomies, in which they remove all or part of the esophagus.

With each technique, surgeons create a new esophagus using the patient's own stomach, said Boutros. A patient's colon can be used instead, if needed.

Laparoscopic and robotic-assisted procedures are less invasive and have yielded positive results, including smaller incisions, less blood loss and a shorter recovery. In 2013, Boutros performed the state's first robotic-assisted esophagectomy, and UM Cancer Network surgeons have been performing them ever since.

"Sometimes primary care physicians are amazed with the results," he said. "They think we aborted the procedure because they can't find an incision."

Most patients spend a week in the hospital after the procedure.

Network physicians use EMR to remove early-stage esophageal cancer that has not penetrated beyond the mucosa and precancerous growths along the lining of the gastrointestinal tract. This technique works especially well on esophageal cancers and tumors that are 1 to 2 centimeters in size, says Raymond Kim, MD, assistant professor of medicine at UMSOM.

Once the tumor is removed, pathologists examine its edges. But even if the edges are positive for cancer, it does not always mean the cancer has spread to submucosal layer. With EMR, physicians typically remove tumors in pieces, Kim says, and it's difficult to tell if a margin was from the deep side or lateral side.

"Lateral margin positivity is expected when the cancers are removed with EMR in piecemeal fashion," Kim says. Data shows EMR is most effective on cancers smaller than 20 mm.

With EMR, most patients go home the same day.

ESD is an innovative procedure that involves removing tumors found deep within the gastrointestinal tract. Before ESD, tumors larger than 3 centimeters could not be removed in one piece. With ESD, physicians peel off the entire tumor above the muscle layer using a special endoscopy knife.

"It takes more time, but it's a more detailed and meticulous way to get the tumor out," Kim says. "This is where the big difference comes in with EMR and ESD. With ESD method, one can tell if the deep or lateral margins are positive or not after the resection."

Like EMR, pathologists examine the tumor post-procedure to determine the stage (if it's limited to the mucosal or submucosal layer or if it has expanded to the muscle layer).

Kim is one of the few physicians in Maryland performing the technique. He began doing ESDs about two years ago and has performed more than 40 since.

With ESD, most patients go home the same day.

Radiofrequency ablation is an outpatient procedure that can destroy pre-cancerous cells in the esophagus. UM Cancer Network physicians insert a balloon containing small electrodes into the esophagus through an endoscope. They then inflate the balloon, allowing electrical current to pass through, heating and killing the cells.

Like radiofrequency ablation, cryotherapy is an outpatient procedure that can destroy pre-cancerous cells, but it uses the extreme cold of liquid nitrogen instead of heat. University of Maryland Medical Center was one of the first centers in the world to use this therapy, and it remains a pioneer in this treatment. UM Cancer Network research also shows with cryotherapy, precancerous or cancerous cells typically do not return within a five-year period.

Refer a patient for one of these innovative treatments. 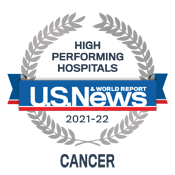