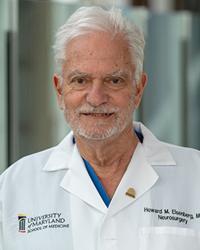 A neurosurgeon, Dr. Eisenberg has special interest in treating movement disorders—including essential tremor and Parkinson’s disease—and neuropathic pain. He is the R.K. Thompson professor of neurosurgery at University of Maryland School of Medicine (UMSOM).

After receiving his medical degree from the State University of New York (SUNY) in Albany, Dr. Eisenberg completed a two-year general surgery residency at New York Hospital-Cornell University School of Medicine in New York City. He then became a neurosurgery resident at Brigham Women’s and Children’s Hospital in Boston, Massachusetts, and a fellow at Harvard Medical School, also in Boston.

After two years in the Navy, Dr. Eisenberg returned to Brigham to serve as an attending physician in the specialty of neurosurgery. He was also a junior faculty member at Harvard. From there, he went to University of Texas, where he was chief of neurosurgery. In 1993, he joined UMSOM, becoming the R.K. Thompson professor and chair of the Department of Neurosurgery. He recently stepped down as chair but remains a clinically active faculty member.