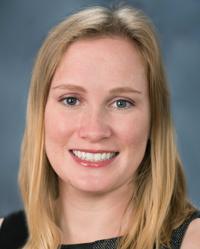 Audrey Drummey, MD, an OB/GYN with University of Maryland Shore Medical Group-Women's Health, has a passion for bettering the health and lives of women throughout their life stages. Her interests include the management of gynecologic health, contraception, fertility and low- and high-risk pregnancies. She has experience in minimally invasive gynecologic surgery with laparoscopic and DaVinci robotic approaches for the treatment of heavy menstrual bleeding, fibroids, endometriosis and chronic pelvic pain.

Dr. Drummey is from the Washington, D.C., area. She earned her bachelor's degree from Tulane University in New Orleans, Louisiana. She completed her medical degree at Virginia Commonwealth University in Richmond, Virginia, where she developed an affinity for women's health. Dr. Drummey trained in Obstetrics and Gynecology at Carolinas Medical Center in Charlotte, North Carolina. She was elected to serve as the Academic Chief Resident, a role in which she worked to further evidence-based medicine and quality improvement.

Dr. Drummey's diverse interests have led to several presentations at national meetings. She has presented work on vaginal breech deliveries at the 2017 CREOG & APGO Annual Meeting. She also created a video to help educate other health professionals on vaginal deliveries, which was presented at the 20202 CREOG & APGO Film Festival. She earned a Future Leaders award from the Society of OBGYN Hospitalists for her passion for maternal safety and quality improvement. She is passionate about women understanding their genetic predispositions for cancer, and researched and presented on a model for Universal Genetic Screening for BRCA and Lynch Syndrome at the Society for Gynecologic Oncology Winter Meeting and Annual Meeting in 2019.