Young Boy Receives a Kidney Transplant from an Altruistic Donor

Since birth, Ethan Hatton battled multiple congenital conditions that eventually caused his kidneys to fail, making a kidney transplant necessary. When Drew Sollenberger expressed his desire to become a non-directed kidney donor, doctors at the University of Maryland found his kidney to be a perfect match for Ethan and immediately arranged the transplant. Watch Ethan's story.

Altruistic living donor, Drew Sollenberger, talks about his decision to donate a kidney and save a life.

Kahla Tallie started getting sick when she was only five months old. She had high blood pressure and wasn't able to urinate. Her kidneys had shut down, which led to her hospitalization for several months where she received dialysis. The pediatric nephrology team talked with Kahla's mother about a kidney transplant, and she was approved to be donate a kidney to her daughter. Watch their story. 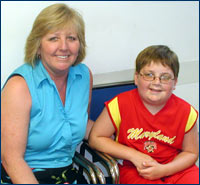 Nancy McClintock (Madison's mother): Until Madison became sick, he had no medical problems at all. Then, he started looking pale and he became lethargic. He also started throwing up. I brought him in for a physical and the blood work showed that he needed a kidney and needed to start dialysis.

I was in total shock at that time. I could have taken him to another hospital for his treatment, but I chose the University of Maryland Medical Center because I was more familiar with Maryland. When I was told that Madison was going to need to be on dialysis, I really didn't know anything about it, but I learned.

Madison had to get on peritoneal (through the abdomen) dialysis for nine hours a day while he slept. He was on it for 2 1/2 months when he received a kidney from his father. It was a successful transplant and his kidneys started working immediately. Everything went wonderfully until his creatinine level began creeping up. They biopsied his kidney and changed his medication. They tried to help his new kidney to adjust with drugs, but we later found out that he was in acute rejection.

Madison's body had a severe allergic reaction to the antibodies. We are in a holding pattern now to see what his body is doing. He is currently taking 25 pills a day, down from 50 pills. The prednisone in his medications has caused him to gain weight, but he has been a good patient.

Despite his illness, he kept up with all of his work. I ended up home schooling him the last month or so of last school year. He really likes math. In fact, he graduated with honors from his middle school.

Madison is a typical boy in many ways. He likes to play basketball and is a big Redskins and World Wrestling Federation fan. Our experience here has been wonderful. Everyone I've met over the last year and a half has been great. They all went out of their way to make sure that he was happy, comfortable and entertained during this process. When he was hospitalized, he was able to play Nintendo and e-mail his friends. I love the staff at the Children's Hospital. They are so dedicated.