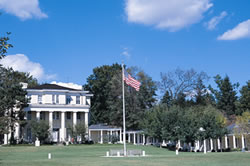 Founded in 1895 by Dr. R. Tunstall Taylor and his brother, Robertson Taylor, the Hospital for Crippled and Deformed Children was originally located at 6 West 20th Street. It was a free orthopaedic hospital for "crippled and deformed children." Within a year, the facility became overcrowded and moved to 2000 North Charles Street, the building next door to the hospital.

Two years later another house, 2 West 20th Street, joined the hospital to form a complex. The present site of the hospital came about with a simple request for a piano. Ada Mosby worked at the Hospital for Crippled and Deformed Children when she advertised for a piano. Mr. James Lawrence Kernan responded to the advertisement, visited the hospital, and promptly said, "You don't need a piano, Miss Mosby, you need a hospital!"

Mr. Kernan was a theater owner, showman and philanthropist. He purchased Radnor Park and deeded it to be the hospital. On February 16, 1911, after converting the mansion into a working hospital, the name was amended to The James Lawrence Kernan Hospital and Industrial School of Maryland for Crippled Children, Inc.

In 1926, through the generosity of Helen Turner, funds were made available for the construction of a new, modern hospital on the Radnor Park site and the remodeling of the existing mansion for administrative use. In the new building, Kernan Hospital had ward space for 75 patients and private rooms for five.

Throughout the years, with the dedication of the staff, surgeon leaders, and board members, Kernan Hospital continued to provide free medical and surgical treatment, classroom education and a form of occupational therapy that resembled pre-vocational training. Charles B. Reeves, Sr. President of the Board of Trustees, oversaw the continued growth and expansion of the hospital until his death in 1955.

With continued leadership and support from the community, Kernan's inpatient and outpatient programs have expanded to include adults as well as children. Working collaboratively with the community, the hospital continued to be modernized and expanded. The addition of Sports Medicine - treatment for sports injuries - as provided to the Baltimore Colts football team brought Kernan Hospital acclaim among adults and athletes.

Charles B. Reeves, Jr. recently announced his resignation as President of Kernan's Endowment Fund. Mr. Reeves has provided committed service to Kernan over the past 50 years, a commitment that has followed and reflected his father's. Due to Mr. Reeves' very generous financial gift of $1 million to the Kernan Endowment, the mansion has been renamed "The Reeves Mansion."