Featured in the Fall/Winter 2015 edition of UMMC Connections

At the new Drs. Rouben and Violet Jiji Neonatal Intensive Care Unit, patient care requires a lot of space – even though the tiny patients themselves take up hardly any of it.

But before the newborns become strong and well enough to go home, there is specialized equipment to keep them warm, soften the lights and dampen the noise. Most important of all, there's a team of caregivers who confer and work together in the specialized rooms. And the team includes the patient's family, who need a supportive and comforting space.

The Drs. Rouben and Violet Jiji NICU is one of two Level IV NICUs in the state. Level IV is the highest designation, providing the most intense level of care to the most critically ill babies. 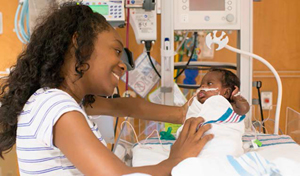 Early this fall, the babies were moved from the old NICU to the new one in a series of carefully orchestrated maneuvers – one patient at a time. Featuring 52 individual rooms, the NICU is a place where parents can spend time alone with their newborn without competing for space. Even the twin rooms, albeit connected by a door through the middle, are separate. Each patient's care is unique.

"The space is really conducive to family bonding," said Kailee Knight, BSN, RN, a nurse in the unit. "Moms can bond and stay with their babies, and each baby has their own everything in their room. It's very special."

The photos that line the walls depict Maryland's wonderfully varied landscapes and wildlife. The waiting room is well-lit and lacks the intimidating sterility of some hospitals. Families who never saw the old NICU might think this kind of tranquility is the norm. But the previous space was loud and crowded, with multiple babies per room. Even though the monitoring equipment and staffing models were up to date, the environment of the old NICU was still old school.

To design the new NICU, architects at Marshall Craft Associates consulted those who knew the unit's needs best: the nurses. The process started with site visits to exemplary NICUs across the nation. As an interdisciplinary team, the NICU staff traveled to Maine, Rhode Island, DC and Michigan to get ideas from other hospitals. Nurse leaders managed different work groups and coordinated with the NICU Family Advisory Council to make sure every detail from grassroots support down to operations and communications was covered.

Cheryl Horn, MS, RNC-NIC, has been at UMMC since she first started as a nursing student. She was here for the previous move in 1989, so she knew the protocol to expect in moving the babies to a new space. She participated in the design meetings, saw the two mock-up rooms and tested equipment before the babies arrived.

Still, all of that groundwork didn't prepare her for the way the rooms would feel when she started working in the space.

"I feel like I'm entering the family's environment rather than a clinical setting," Horn said. "It's like the parents' living room."

There's a lot to love about the new space: Parents can now spend the night in their baby's room, shower in the family lounge's full bathroom and have private conversations. Each of the rooms is outfitted with noise-canceling windows and circadian lighting, which mimic the day-night sleep cycle most people are accustomed to.

In spite of the excitement of new space, the whole staff knows spirits will not always be so high. At a critical care facility, everyone must come to work prepared to face clinical and emotional challenges, with help from NICU pastoral care and social work team members. Treza James, MS, NNP-BC, clinical practice education specialist, says of the staff's clarity in their mission, "excellence is not an option; it's always been our expectation."

Now that the NICU team and families have the space they need, they can focus on what's most important: positive outcomes for patients.

To learn more about the late Rouben and Violet Jiji and see videos of the new NICU, go to the UMMS Foundation website.