How is a Stroke Treated?

In order to change people's perception of stroke as untreatable, there has been a national effort over the past decade or so to call it a "brain attack," acquiring some of the urgency popularly associated with heart attacks. The acute treatment of "brain attacks" has not reached the level of success now achieved with heart attacks. Nevertheless, acute treatment is beginning to show results if done within three hours of onset.

Immediate treatment is needed to:

Other stroke care aims to:

Other drugs are used to:

Other interventions during an acute stroke include:

Surgery may be performed following a stroke or TIA to prevent a recurrence. Surgical techniques include:

Endovascular therapy allows a specially trained physician to mechanically remove the clot that is causing the stroke symptoms. In January 2018, the American Heart/ American Stroke Association released updated Stroke Care Guidelines that allow for a larger number of patients to be eligible for treatment. Patients meeting select criteria that arrive within 24 hours of their last known well time may be eligible for this form of treatment. Rapid recognition of stroke symptoms allows for the determination of eligibility and transfer to a Comprehensive Stroke Center for treatment. Patients ineligible for the clot busting drug (Alteplase) may be eligible for endovascular therapy. 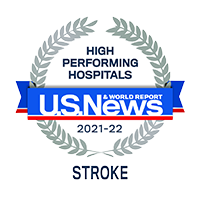